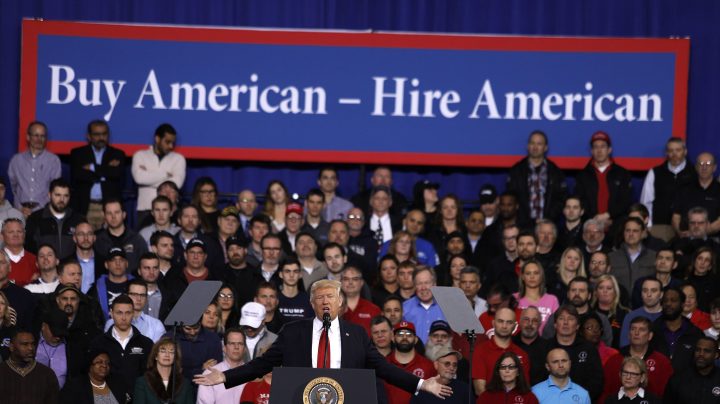 COPY
President Donald Trump gives a speech in 2017. There's a renewed effort to bring American companies' production back to the U.S. during the COVID-19 pandemic. Bill Pugliano/Getty Images
COVID-19

President Donald Trump gives a speech in 2017. There's a renewed effort to bring American companies' production back to the U.S. during the COVID-19 pandemic. Bill Pugliano/Getty Images
Listen Now

Some senators want to increase taxes on U.S. companies’ income from China. Others want generous investment subsidies to get U.S. companies to produce more in the United States. There’s also discussion of a $25 billion fund to pay companies to exit China and come back to the U.S. The goal writ large: bring supply chains home.

“We could reshore thousands, hundreds of thousands, maybe millions of jobs if we could figure out how to bring many of that manufacturing capability back,” said Jeffrey Finkle, president of the International Economic Development Council, a group of local and state economic officials. Attention to reshoring jobs has been simmering for a while, but the supply chain shock of coronavirus has brought it to full boil.

“We discovered painfully we could not supply enough [personal protective equipment] for our health care workers,” Finkle said. He added that tax breaks or investment incentives have in the past been able to bring industries to specific locations in the U.S.

“Investment subsidies could increase American production of certain things,” said Chad Bown, a senior fellow with the Peterson Institute for International Economics. But he said that might not help in a future pandemic as much as people think.

“During the pandemic in the United States, we’ve had outbreaks of the disease at manufacturing plants, meatpacking facilities,” Bown said. Other countries, he said, could retaliate by giving their own businesses special treatment.

Rufus Yerxa, president of the National Foreign Trade Council, said tax breaks have their place, but there’s a limit to reshoring. Many companies have operations abroad in order to sell abroad.

Susan Lund, a partner at the McKinsey Global Institute, said there is an appetite right now for shifting supply chains around.

“Many companies are talking about diversifying their source of suppliers,” Lund said.

Between tsunamis and trade wars and global pandemics, it’s dawning on global businesses that having your manufacturing eggs in one basket is not a smart strategy.

“But that is different from production coming back to the U.S.,” Lund said. As per usual with international trade, things are never that simple.