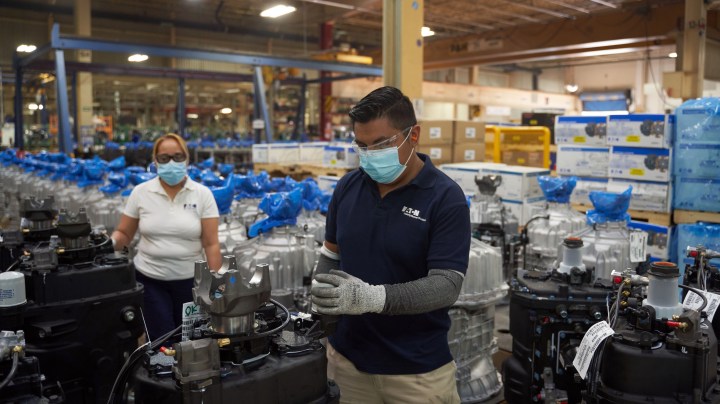 COPY
With rising labor costs in China and the delay in receiving goods, some U.S. manufacturers are moving operations to Mexico. Above, workers at a truck parts factory in San Luis Potosí, Mexico, in May 2020. Mauricio Palos/AFP va Getty Images

With rising labor costs in China and the delay in receiving goods, some U.S. manufacturers are moving operations to Mexico. Above, workers at a truck parts factory in San Luis Potosí, Mexico, in May 2020. Mauricio Palos/AFP va Getty Images
Listen Now

China is still the manufacturer to the world, accounting for 28.7% of global manufacturing output in 2019. But after a pandemic, a trade war and rising wages in China, many manufacturers have been looking for other options. One increasingly strong option is Mexico.

“It used to take 21 days for merchandise from China to come to the port of LA or port of Long Beach and get to our warehouses. Today, it takes 159 days,” said Isaac Larian, CEO of MGA Entertainment, which makes Little Tikes toys like Cozy Coupes — those red and yellow plastic cars with googly eyes that kids ride in. It has factories around the world, including in Hudson, Ohio.

Back to the supply chain problem: 159 days to get stuff from China to MGA Entertainment’s U.S. warehouses. And that’s not even counting the lockdowns in places like Shanghai.

“We have factories who make our product in the Shanghai area. In Guangzhou, they open and close areas every couple of weeks. That adds to those delays,” he said.

Larian worries about strikes at U.S. ports. The International Longshore and Warehouse Union contract expires July 1, and he predicts a strike will be part of that. He’s also had problems finding workers here in the United States.

“We are paying way above minimum wage for factory workers,” he said. “I think the issue frankly that happened here was a perfect storm — the previous administration stopped the immigrant workers to come to this country, and they were good workers who work hard, and they’re honest, and they like to do the hard work, whether its factory work or farm work. And simply American labor is not willing to do that.”

And the pandemic has created a tight labor market in many industries. Meanwhile, demand for toys has been raging.

Setting up shop in Mexico

MGA Entertainment is keeping its U.S. factory and its relationships with Chinese factories, but it recently opened two factories in Juarez, Mexico, and is about to open a third. Many companies are increasing their presence there.

“I think an increase is an understatement,” said Raine Mahdi, CEO of ZipFox.com. “I think it’s more like a tidal wave.” Mahdi’s company connects U.S. businesses with manufacturers in Mexico. Much of what he’s seeing is rerouting from China.

“We are still in an active trade war. We do have 25% tariffs levied on everything we import from China,” Mahdi said. Products coming from Mexico do not have those tariffs. Shipping is obviously a lot easier. And there have been simmering issues in China that predate the trade war.

“Intellectual property theft is one of the main issues for businesses who have IP. Counterfeiting is a big issue,“ he said.

And then there are labor costs.

China’s economy has been developing quickly, living standards have risen and productivity has risen, as well. But its wages have risen faster than productivity, Maurer said. So even before the pandemic, there was pressure to start moving to Mexico — Northern Mexico in particular, where demand is now showing up in the real estate market.

“If you’re trying to find real estate or industrial parks or warehousing close to the border, you won’t get anything until 2024, 2025. Everything’s sold out,” said Omar Troncoso, a partner at the Mexico City office of consulting firm Kearney.

Troncoso is helping several clients relocate from Asia to the U.S. and Mexico — and not just to supply the U.S., but to supply companies back in Asia as well. He’s seeing manufacturers who make things for other manufacturers also start to move to Mexico, and this is creating a critical mass.

“So once you have that scale, then I think the sustainability is for the long run,” he said.

But Mexico’s rise as a star of manufacturing could see it collide with another global trend: automation.

“Robots that are installed in the U.S. actually have a strong negative impact on local employment in Mexico,” said Marius Faber, a research fellow at the University of Basel.

Companies that are turning to Mexico to save money and solve their labor and supply chain problems might, in some cases, also turn to robots to solve some of the same problems. Whether this disrupts or alters the course of reshoring or nearshoring to Mexico “depends on how automation technologies will develop going forward.”

This trend also depends on politics — in both the U.S. and Mexico, added Maurer.

We are at a moment of tremendous change in how and where we make what we make. And how it all shakes out will determine the fortunes of industries and economies for years to come.