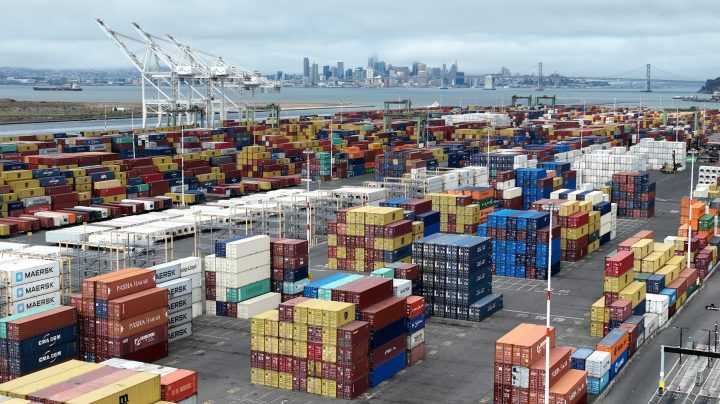 COPY
West Coast ports have grappled with hurdles to bringing foreign-made goods into the U.S. market. Those problems are among the factors stirring plans to relocate manufacturing and create jobs here. Justin Sullivan/Getty Images

West Coast ports have grappled with hurdles to bringing foreign-made goods into the U.S. market. Those problems are among the factors stirring plans to relocate manufacturing and create jobs here. Justin Sullivan/Getty Images
Listen Now

Manufacturing jobs are returning to the U.S, according to a new report from the Reshoring Initiative, a lobbying group that’s been tracking this since 2010. It says American companies are on pace to reshore nearly 350,000 jobs this year, the highest number in recent history.

Global manufacturing and logistics have seen lots of hiccups recently, helping to motivate the movement back to the U.S. There’s the pandemic, which has repeatedly shut down factories in China, while fires and flooding have done the same in Japan and Thailand. There was that ship that got stuck in the Suez Canal. Add in skyrocketing shipping costs.

“This memory is going to be sticky of all of these challenges that companies have faced, and they’re going to, whenever possible, I think, try to shorten the supply chain,” said John Gray, a professor of operations at Ohio State University.

A shorter chain means less room for error and uncertainty. But that security comes with a higher price tag, so it’s not worth it for every company.

“Products that are high labor content, relatively easy to ship, not a major national security or intellectual property risk, those are probably likely to remain in low-cost countries for some time,” Gray said.

The U.S. is not going to become a leader in manufacturing apparel or toys. But it’s gaining jobs in high-tech manufacturing for things like semiconductors and electric vehicle batteries. David Simchi-Levi, a data scientist at the Massachusetts Institute of Technology, said tensions between the U.S. and China and legislation like the CHIPS and Science Act and the Inflation Reduction Act will incentivize manufacturing in this country.

“Companies are now willing to make the investment,” Simchi-Levi said. “I think this is here to stay.”

So what does this mean for American workers? The 350,000 added jobs may not sound like much. But Susan Houseman, an economist at the Upjohn Institute for Employment Research, said it’s equal to 3% of U.S. manufacturing.

“So if this translates into a net increase in employment, that’s not a small thing,” she said.

What really makes it not a small thing is that these are considered good, middle-class jobs for people who don’t necessarily have a college education.