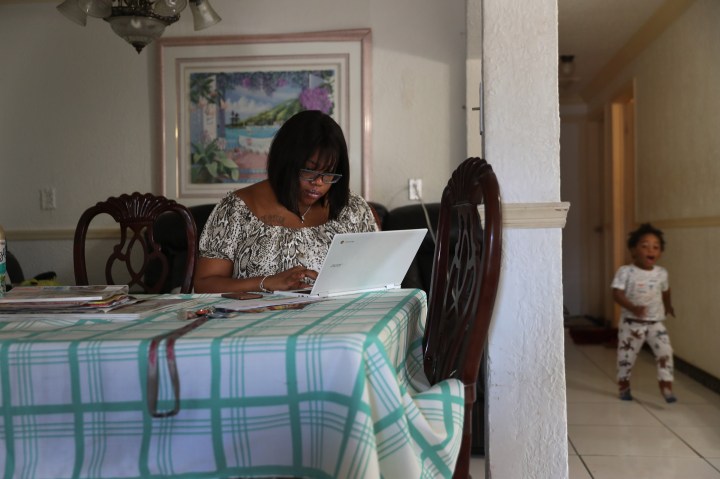 David Brancaccio and Rose Conlon May 5, 2020
Heard on:

COPY
Many Americans are scared they won't be able to afford basic necessities after losing income during the COVID-19 pandemic. Joe Raedle/Getty Images
Economic Anxiety Index®

David Brancaccio and Rose Conlon May 5, 2020
Heard on:

Many Americans are scared they won't be able to afford basic necessities after losing income during the COVID-19 pandemic. Joe Raedle/Getty Images
Listen Now

Forty-four percent of Americans are worried about their ability to afford food or groceries right now, according to new data from our regular Marketplace-Edison Research Poll.

The survey results put numbers to what we’ve been seeing and experiencing anecdotally: The COVID-19 pandemic has acutely impacted our personal finances, leaving many wondering how to pay basic living expenses amid unemployment, lost income and personal tragedy.

“The main theme of the survey is fear,” said Larry Rosin, president and co-founder of Edison Research, in an interview with “Marketplace Morning Report” host David Brancaccio.

Rosin pointed to the single-largest jump in the Economic Anxiety Index® since we began the measurement of economic anxiety in 2015. Since our last survey in May 2019, economic anxiety increased for nearly all demographic groups, except for those making less than $25,000 per year.

The result is sweeping financial precarity for large swaths of the country and uncertainty about how monthly bills will get paid. Fifty-four percent of homeowners and 62% of renters are at least a little fearful that they won’t be able to make their regular payments.

Many Americans are experiencing varying levels of food insecurity, and more than half of those who make less than $50,000 per year are at least a little concerned about their ability to afford food or groceries.

“That’s a huge change over anything we’ve seen before,” Rosin said.

The spike in economic anxiety coincides with sweeping income loss: One-third of American households have lost income since the COVID-19 pandemic began. A quarter of Americans currently working have experienced a pay cut and 36% are working fewer hours. Seventeen percent are currently unemployed.

Despite expanded unemployment benefits under the CARES Act, many people are having a hard time actually getting their hands on the money. Sixty-three percent of those who have tried to file for unemployment said it was very or somewhat difficult. More than a third were ultimately unsuccessful in filing.

“It’s troubling that we have so many people in need, and they turn to the states who have these systems set up to help them, and almost two in every three are saying that it’s a difficult process,” Rosin said.

And with job loss often comes loss of health insurance, which many Americans are now experiencing during a pandemic.

“We have a health care system that’s largely predicated on being employed. And we have a large number of people who now say they’ve become unemployed or were furloughed in just the last few weeks,” Rosin said.

“And so the number of people who say that they have deep fears of an unexpected medical expense is very, very high.”

Check out the full poll results here and here, and read more about our methodology below: