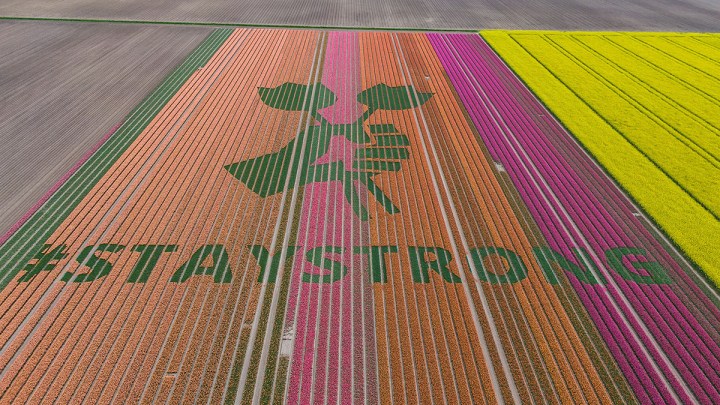 COPY
A field of tulips spells out the message "Stay Strong" in the Netherlands. Wilbert Bijzitter/AFP via Getty Images
COVID-19

A field of tulips spells out the message "Stay Strong" in the Netherlands. Wilbert Bijzitter/AFP via Getty Images
Listen Now

European nations are continuing to relax strict lockdown guidelines in an effort to get business back up and running and limit economic damage from the COVID-19 pandemic.

Starting this week in Switzerland, garden centers are among the list of shops that can reopen.

For many people, that means more opportunities to enjoy the spring sunshine outdoors. You might think that also means boom times for the more than $50 billion global floriculture industry.

But not all is as it seems.

It’s true that U.K. citizens have been busy getting their hands dirty in their home gardens. People haven’t just been stockpiling toilet paper and flour — they’ve also been placing online orders for things to spruce up their flower beds.

“We’re actually having to turn off our website or prevent people from buying certain categories just to catch up, really,” said Ed Webb, chairman of Webbs Garden Centres, located in the middle of England.

He said the company has been attracting about four times the number of customers it normally would during the spring selling season.

“Historically, our online business has been built around higher-ticket lines like furniture, big landscape material products, and they’re still at peak demand and flying out,” Webb said. “But what we’ve seen a ginormous increase in is a demand for things like packet of seeds, plants, grow-your-own, all the pots and propagation material that goes with that.”

While Webbs and other garden centers around the world might be seeing a surge in demand, the picture isn’t nearly as sunny at the start of the horticulture supply chain.

Data shows that in the five weeks leading up to April 17, sales at Royal Flora Holland — the world’s biggest plant and flower auction — dropped, on average, 50% each week from the year prior.

That’s meant many growers are now throwing away up to 80% of their production, according to Marco Van Zijverden, CEO at the Dutch Flower Group.

“Production time for some products is eight weeks, some 10 weeks or three months,” he said. “You can’t stop it right away. And we can’t keep the flowers for months in a cold room. It’s a fresh product, it’s perishable.”

Van Zijverden said some growers across the world have had no choice but to shut down large portions of their production. That stoppage will likely cause another wrinkle as economies begin to reopen later this year.

“June is very big for the wedding season. So, the whole wedding season is probably shifting to August and September,” Van Zijverden said. “And there can be a huge pressure on the volume of flowers. But it’s difficult to judge that. It’s just so difficult.”

The clouds may be starting to clear, though: The rate at which sales have declined at Royal Flora Holland has been slowing in each of the last three weeks.

That’s also about the time Holland’s Flower Council launched a campaign across Germany, France, the Netherlands and the U.K. encouraging consumers to buy flowers and plants to “Let Hope Bloom.”

A rosy disposition despite thorny times.