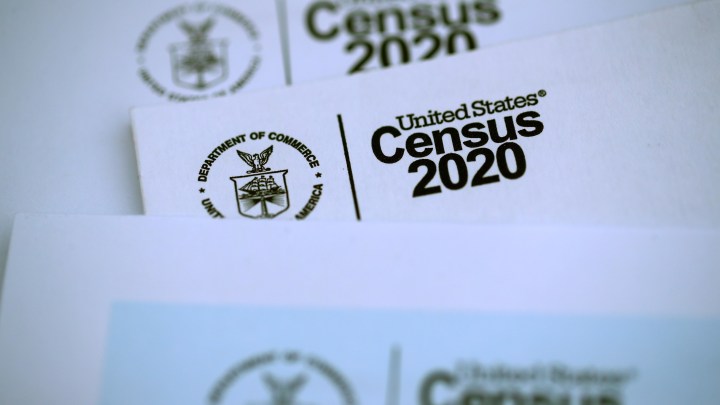 COPY
The U.S. Census Bureau announced that it has suspended census field operations for now over concerns of the census workers and their public interactions amid the global coronavirus pandemic. Justin Sullivan/Getty Images
Shelf Life

The U.S. Census Bureau announced that it has suspended census field operations for now over concerns of the census workers and their public interactions amid the global coronavirus pandemic. Justin Sullivan/Getty Images
Listen Now

The 2020 census, like those that came before it, was to be the nation’s largest peacetime mobilization, deploying up to 500,000 census takers to follow up with households that do not respond either online or by mail. The face-to-face enumeration has been important in getting a more accurate head count of American residents. But, with the COVID-19 pandemic calling for social distancing, the U.S. Census Bureau is heeding the guidance set forth by federal, state and local health authorities, and has suspended 2020 Census field operations in the near term.

Today the census serves as an important tool for determining congressional apportionment and assessing federal funding to state and local governments. But, counting people (and cattle, and fruit, and cheese) is an age-old process that, in the past, was used to levy taxes on work — through monetary payments, military conscription or corvée labor.

The following is an excerpt from Andrew Whitby’s new book, “The Sum of the People: How the Census Has Shaped Nations, from the Ancient World to the Modern Age.” In the book, Whitby details how enumeration went from an operation that was often exclusionary and served those in power to an exercise in mathematical science that attempts to get an accurate snapshot of a population.

In fifth grade — 1991— my parents transferred me to a well-regarded Anglican school. We weren’t particularly religious, but it was a good school, and I soon got used to the weekly rhythm of chapel services. One day, in the final school week of that first year, I sat on a wooden pew, stewing in the heavy, listless air of a Brisbane summer. A boy stood and took his place at the eagle-winged lectern. “A reading from the book of Luke,” he began, “chapter two, verses one to seven” (New International Version).

In those days Caesar Augustus issued a decree that a census should be taken of the entire Roman world. (This was the first census that took place while Quirinius was governor of Syria.) And everyone went to their own town to register. So Joseph also went up from the town of Nazareth in Galilee to Judea, to Bethlehem the town of David, because he belonged to the house and line of David. He went there to register with Mary, who was pledged to be married to him and was expecting a child. While they were there, the time came for the baby to be born, and she gave birth to her firstborn, a son. She wrapped him in cloths and placed him in a manger, because there was no guest room available for them.

He stumbled over Quirinius. I marveled at the exotic sound of Galilee and Judea. And of census, a word new to me.

Had I been a more attentive child, it wouldn’t have been, for Australia had conducted its own census just a few months earlier, on August 6, 1991. Though I evidently took no note of it, it duly noted me among nearly seventeen million others. I imagine that my mother filled out the orange-tinted form on our kitchen bench, amid the usual pile of halfopened mail. (I was probably watching television in another room.)

Years later, now living in the United States, I found an archived blank of the 1991 Australian census form online. “The Census is like a stocktake of our nation,” it begins. That’s a favorite description of census takers, one that goes back more than century. I think I understand why they keep using it: whereas the suspiciously sibilant census comes from Latin, stocktaking is reassuringly Anglo-Saxon. Stocktaking suggests counting boxes on the shelves of a warehouse: this many of product A, that many of product B. A stocktaking is routine: nothing to worry, or even think particularly hard, about.

Today, the vast majority of the world’s nations conduct a count of their populations at least once every decade: a decennial census, the adjective another Latin import. Between the words we use to describe it and Luke’s account of the nativity, quoted above, you could be forgiven for supposing the Romans started all this, but they did not. As with laws, taxes, and religion, counting people is an institution of community that goes back as far as community itself, in ancient China, the Fertile Crescent, and probably everywhere else that people began to live together in large numbers.

Nor does the modern census look much like the Roman one. Like any long-lived institution, the census has had many different, conflicting functions over its history. It arose to satisfy the administrative needs of despots yet eventually developed a crucial role in supporting democracy. It drew the attention of statisticians before they called themselves that, and then flourished, as an instrument of scientific inquiry, once they did. As nations and empires coalesced, it served to define and support them. More than once, it was co-opted for protest and dissent against those empires.

The idea of a census is not limited to nations and empires: smaller communities, cities, and provinces, hold them too. Even Black Rock City, a temporary town in the Nevada desert, rebuilt from scratch every year for the anarchist-inspired Burning Man festival, has a census (2018 population: around seventy thousand). But the census of nations is the focus of this book. That procedure is heavy with symbolism. It delineates boundaries no less than a map or border wall does. It is a moment of communal self-reflection: a stocktaking only if you imagine that cans of beans could decide to count themselves.