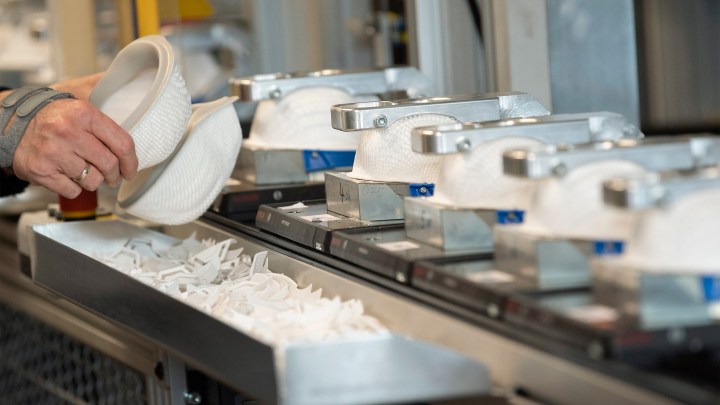 COPY
A program to monitor global protectionism found governments placed 46 different export controls on coronavirus-related safety supplies and machines this year. Above, masks are produced at factory in Germany on March 12. Thomas Kienzle/AFP via Getty Images

With critical ventilators and medical safety gear in short supply globally, countries that manufacture these goods are racing to keep them inside their borders. Nearly three dozen governments have banned or limited exports in March alone, a new study finds.

The export bans on critical medical supplies began in January in Asia, where of the global pandemic started.

“Countries like Taiwan [were] very fast to ban the exportation of masks,” Simon Evenett, international trade professor at the University of St. Gallen in Switzerland, said. “And then countries like Korea, likewise.” Evenett is founder of Global Trade Alert, a program to monitor global protectionism, which tallied the accelerating trend of COVID-19 medical export restrictions.

Individual governments have defended decisions to keep medical equipment at home, arguing they must take care of their medical workers and patients first. However, the rules have canceled some deliveries to needy countries. At one point, a French producer of masks entered into an export contract with the British government.

The French company had to call the British health service and say “We can’t deliver these millions of masks.”

The Czech Republic also banned exports of masks. According to Evenett, Germany even intercepted a shipment of Chinese-made masks bound for Switzerland.

“They were just trans-shipping through Germany, and they got caught up in this,” he said. “The Swiss went ballistic. And they called in the German ambassador and really gave him a telling off. The last I heard they were still in Germany.”

Two weeks ago, the European Union agreed to a cease-fire — kind of. It allowed buying and selling of face shields, protective garments, masks and gloves inside the EU but not outside.

“We need to keep in the EU the protective equipment we need,” Ursula von der Leyen, head of the European Commission, said in an online video message March 15. “Such medical goods can only be exported with the explicit authorization of the EU governments.”

The policy, while not an outright ban, in reality means “extra hurdles, extra steps,” Chad Bown, trade scholar and senior fellow at the Peterson Institute for International Economics, said.

Economic nationalism and hoarding aren’t new, Bown said. Many countries limited exports a decade ago when they faced critical grain shortages. To Bown, these decisions are understandable, yet could lead to unintended consequences.

“I think that’s a very natural first response,” Bown said. “The problem is, it only takes into consideration what I’m doing today. It doesn’t take into consideration the fact that everybody else could do the same back to me. In which case, we’re all ending up worse off.”

Every country for itself doesn’t just cut off international shipments; it can gum up the global supply chain for, say, ventilators. At one point in the crisis, Romania stopped exporting hoses for ventilators until manufacturers cried foul. Bown worries that more of this could happen as trade walls go up and countries retaliate.

“The trade war experience of the last two years between the United States and China provide an important lesson for how quickly trade restrictions can escalate once they get started,” Bown said.

The biggest losers in a globalized world? The poorest countries that don’t make anything, Evenett said.

“It’s quite possible these countries are never going to get their hands on high-end medical ventilators. So what we are doing? We are condemning lots of people to a painful and horrible death.”