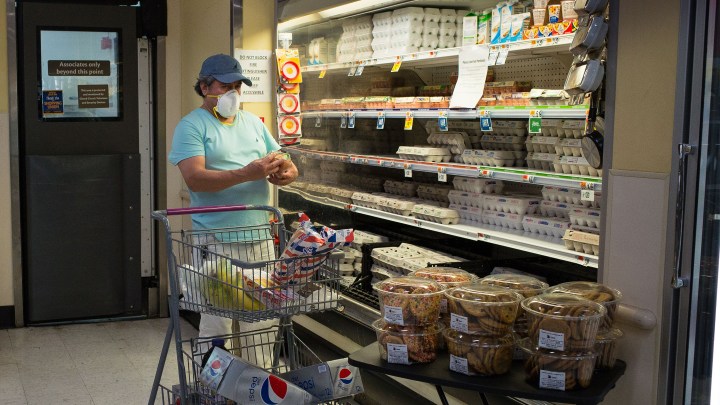 COPY
Egg prices are up as consumer habits change during the COVID-19 global pandemic. Mandel Ngan/AFP via Getty Images
COVID-19

Egg prices are up as consumer habits change during the COVID-19 global pandemic. Mandel Ngan/AFP via Getty Images
Listen Now

With the rush to stock up — or hoard — groceries, there’s been a big jump in some commodity prices. The wholesale price of “Midwest large” eggs has tripled since early March and spiked to over $3 for a dozen late last week — an all-time high. Orange juice is also now in short supply here and abroad, and the price has soared on futures markets.

“The grab-and-go breakfast on the run has been replaced by a family breakfast,” Yarrow said.

And Marina Michelson, co-owner of Paper or Plastik Café in Los Angeles, is supplying the ingredients. Since shutting down table service, she’s been selling groceries out of her pantry.

“The things that sell the best are definitely breakfast items,” Michelson said. “In the last 10 days, we’ve sold like 50 dozen eggs.”

Farmers can’t raise more chickens or plant more orange trees right away, so supplies are tight, driving wholesale prices up. But Jim Hertel, food and beverage industry analyst at Inmar Intelligence, said retailers might not pass it on.

“Nobody wants to be seen as a profiteer,” he said. So for the time being, retailers are likely eating the higher costs.