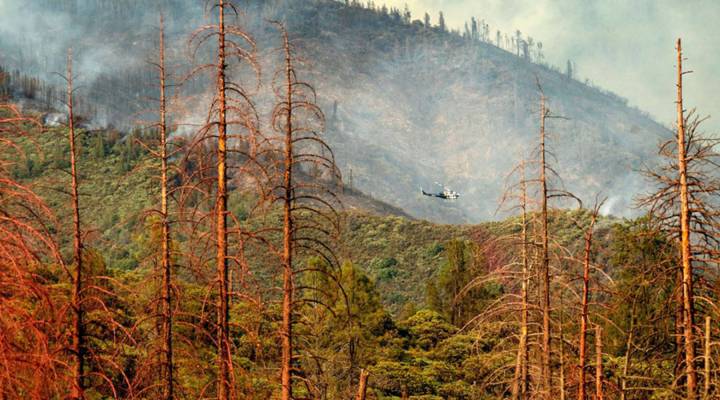 COPY
Dead trees line a clearing as a helicopter battling the Ferguson fire passes behind in the Stanislaus National Forest in California on July 22. NOAH BERGER/AFP/Getty Images

Dead trees line a clearing as a helicopter battling the Ferguson fire passes behind in the Stanislaus National Forest in California on July 22. NOAH BERGER/AFP/Getty Images
Listen Now

Multiple wildfires have already burned hundreds of thousands of acres in California this summer. The Mendocino Complex fire in Northern California is the largest in the state’s history, and the Ferguson fire forced the National Park Service to close parts of Yosemite during the busiest part of the tourist season.

We wanted to know how tourist-dependent businesses up there are doing, so we called up Lori Howard at the Yosemite Sierra View Bed and Breakfast in Oakhurst. It’s about 14 miles away from the gate of Yosemite National Park on Highway 41.

Howard said that outside her window, it looks “like the bottom of an ashtray,” and she’s had a lot of cancellations because of the fires. She said she’ll lose money, and other businesses in her area will as well.

“The Visitors Bureau got together and put out a Facebook for everyone to chitty-chat with. It was amazing to see just how badly everyone’s been hit,” Howard said. “But you know, a farmer has to depend on the weather. We depend on tourism. When you put all of your eggs in one basket, you just kind of have to roll with it.”