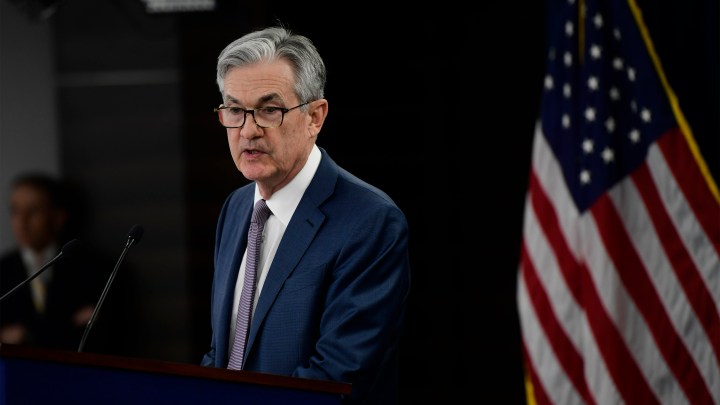 COPY
The Fed also announced a cut in the discount rate in an attempt to stimulate the economy during the downturn caused by COVID-19. Mark Makela/Getty Images
COVID-19

The Fed also announced a cut in the discount rate in an attempt to stimulate the economy during the downturn caused by COVID-19. Mark Makela/Getty Images
Listen Now

You don’t get much more big picture than the Federal Reserve on a Sunday afternoon pulling out all the stops. That huge cut in its short-term interest rate — another big bond buying program — echoes of the financial crisis, to be sure.

Also, the Fed cut something called the discount rate: short-term, emergency loans dispensed through what’s known as the discount window. What we’re talking about here is the Fed making some big moves to keep credit flowing to households and businesses.

Think of the discount window as a shot of WD-40. If a bank is short on cash to cover customer withdrawals or make loans, it can borrow money short term directly from the Fed.

“It’s in effect kind of keeping the financial system lubricated during a stressful time,” said Bert Ely, a banking consultant. He said the problem is that banks are reluctant to reach for the can.

And Joe Gagnon, senior fellow at the Peterson Institute for International Economics, said that looks bad.

“I mean, if a bank has to pay a higher rate to get credit, it’s usually because other banks are leery of lending to it,” Gagnon said. “So it looks like it might be in trouble.”

The Fed is trying to reduce that stigma by slashing the discount rate and by urging banks to use it.

If they say, ‘Well, please come, please come,’ which they also did during the financial crisis, then it’s like everybody’s doing it, and it’s OK, and it’s legitimate,” said Anat Admati, finance and economics professor at Stanford.

It could help that JPMorgan Chase recently said it plans to use the discount window to help break that stigma.

“There’s been an influx of deposits for the safety of the [Federal Deposit Insurance Corp.] deposit insurance, so I don’t think the banks are going to be forced to go to the discount window,” Cassidy said.

But he said it’s better to get them comfortable with the idea before there’s a real emergency.