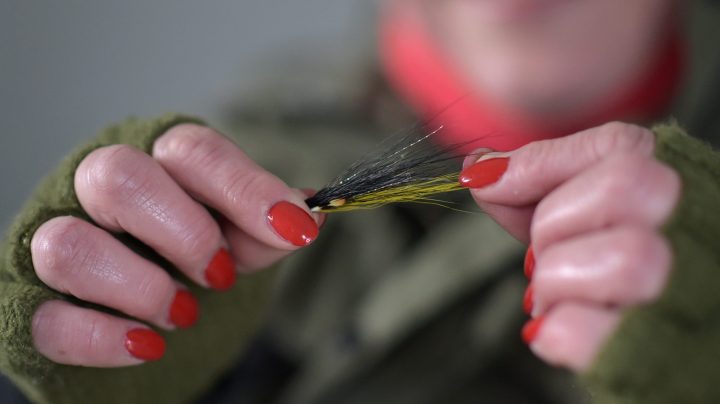 From fish hooks to reels, many pieces of imported fishing equipment are subject to tariffs. Jeff J Mitchell/Getty Images

The United States and China are preparing to sign a “phase one” trade deal Wednesday. This comes after more than a year and a half of escalating tariffs, many of which have affected U.S. businesses and their supply chains. Though the outcomes of the trade war differ across industries, business leaders are united on one thing: it has changed how they run their companies.

The trade war has slowed down business across many industries, including in boating and fishing equipment, much of which is subject to a 15% tax.

“It’s actually caused most companies to freeze, because they don’t know if that’s going to be the same policy a month or a year or four years down the road,” said Nicole Vasilaros, senior vice president of government and legal affairs for the National Marine Manufacturers Association.

Similarly, it has hurt business at the sportswear company Columbia, according to the company’s executive vice president Peter Bragdon.

“We have raised some prices,” Bragdon said. “There are some small numbers of products that we’re simply not offering.”

But the trade war has been good news for one leather company, which is seeing less competition on pricing from China.

“We’ve hired over 150 people,” said Michael Korchmar, CEO of the Korchmar Leather Specialty Company. “It’s made an enormous positive difference. There’s no doubt about that.”

With frequent updates and changes to the state of the trade war, some falsehoods about the tariffs have circulated. We asked business and industry leaders what trade war myth they want busted, and most were in agreement.

“It’s a total myth that it’s China that’s paying and bearing the cost of this,” said Julie Hughes, president of the United States Fashion Industry Association. “It’s really the U.S. companies, the U.S. importers who pay the tariffs, who are bearing the cost.”

President Donald Trump has asserted that the Chinese, not U.S. consumers and businesses, are paying the cost of the tariffs.

“Imposing tariffs is esentially like taking economic poison and counting on it hurting somebody else,” said Bragdon from Columbia Sportswear.

The New York Federal Reserve released a study in May that estimated the annual cost of tariffs to American households was $831.

Many of the businesses negatively affected by the trade war cited a climate of uncertainty, both in the last few years with changing tariffs and ahead of the phase one deal, the details of which are yet to be released.

“It is indeed a frustration that we don’t know what’s in it, and the text won’t be released until after the singing on Wednesday,” Hughes said. “We don’t know when the tariff will be reduced, which just makes it even more chaotic and unpredictable for companies than you need it to be.”