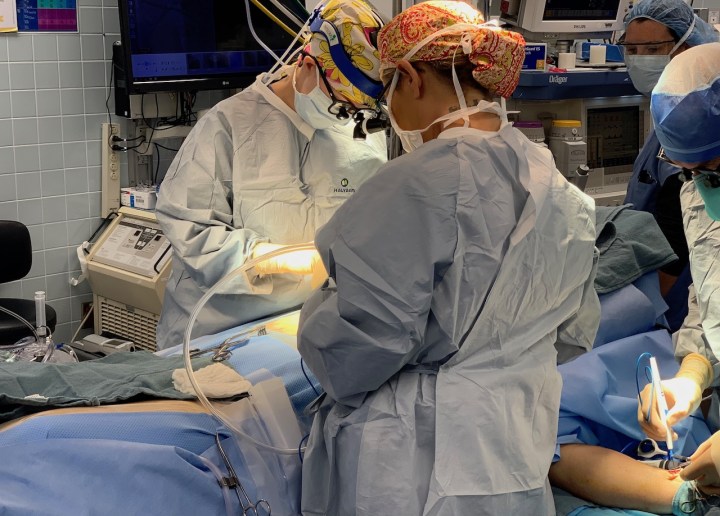 In the busy halls of Nashville’s Saint Thomas Midtown, Dr. Amber Edwards described the basics of the bypass surgery she was about to perform. Then a nurse stopped her at the operating room door.

“I’m the surgeon,” she said politely. The nurse apologized.

“That’s every day,” Edwards said. “I obviously don’t think those people have any ill intentions. I’m also young, and I look younger than I am — thank god — and I’m a woman.”

According to the latest surveys, 94% of practicing thoracic surgeons are men — and that’s an improvement over recent years.

Edwards said she was warned as soon as she showed interest: “You’ll be the only woman, wherever you go.”

During a recent bypass procedure, Edwards asked her assistant to cue up her “Pearl Jam” playlist before the first incision.

Edwards cuts the music during the critical moments when they have to stop the heart. It’s those delicate parts she said she loves — in this case, stitching an artery taken from an arm to get around a blockage.

Edwards’s colleagues say she has some of the steadiest hands in the hospital. They’re also small. Generally, she said, her size puts her a disadvantage; she usually has to stand on a stool, and she has to use two hands for some tools designed to be used with one.

Of course, oversized tools aren’t what actually keeps women from surgery. Often, it comes down to family planning.

Dr. Melissa Levack at Vanderbilt University Medical Center is one of the small group of female heart surgeons. She decided to freeze some of her eggs as a precaution, since she wouldn’t finish the lengthy training until her late 30s. She said the profession needs to consider these kinds of issues for women.

“It’s an important conversation, and we’re starting to talk about it more and more,” Levack said.

In Edwards’s final year of an accelerated training program, she became pregnant. The American Board of Thoracic Surgery, which oversees the training of heart surgeons, wasn’t sure what to do. She expected three months off; she got one.

“I was so tired during that time,” she said. “I remember being angry. And I told them: I understand this job is not built for women, and I know that there is some work to do. But I just need to plan my life around it.”

The parenting challenge didn’t stop when she was more in control of her own schedule as a board-certified heart surgeon. She and her husband decided he would stay home with their infant. They check in a few times each day via FaceTime so she can see her infant son.

Edwards said her husband is the only reason she can be a mother and a devoted surgeon. And that’s a problem, according to Dr. Evelio Rodriguez, who hired Edwards.

“We know that the longevity of our field is in danger,” he said. As a first-year medical student, Edwards would skip class to come watch Rodriguez’s heart surgeries. He became a mentor.

When the Saint Thomas heart surgeons — all men — wanted to expand their group, Rodriguez said, they sought out a woman. He said he sees the lack of women not so much as a diversity problem, but as a matter of attracting talent; women are now a majority of entering medical students nationwide.

Rodriguez said it will require making the career more conducive to family life, which even new male surgeons might welcome.