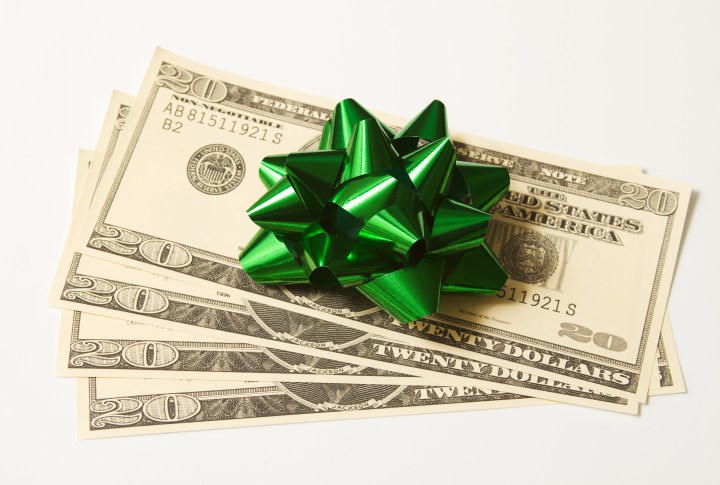 That spirit of thanks, of generosity, of love, is exactly what tipping around the holidays is all about, said Daniel Post Senning, author and spokesperson for the Emily Post Institute.

When it comes to thanking through tipping, there are two big, broad categories of people Senning recommends thinking about.

Also in that category, the super, the handyman, the person who delivers your newspaper.

“The other group that I like to think of are people that help take care of your person,” Senning said. “So if you visit a trainer on a regular basis, or go to the same barber or stylist … these are all people that are good candidates for an annual or holiday tip.”

Despite that conventional wisdom, a survey out this month from CreditCards.com found that a lot of people don’t tip around the holidays. Seventy percent said they’d never tipped their trash collector, 60% never tipped their mail carrier, and 47% never tipped their kids’ teachers or childcare providers. Another, older survey, from Consumer Reports last year, found that 60% of Americans give out at least some holiday tips, most often to hairdressers, barbers and teachers.

Some of that discrepancy likely has to do with facetime, more than anything.

With people like trash collectors and mail carriers, “these are people who largely operate behind the scenes,” said Ted Rossman, industry analyst at CreditCards.com. “We don’t interact with them day-to-day, the same way we might a restaurant server, or the person who cuts our hair. And in general, we are more likely to tip when we have a face-to-face interaction and relationship with somebody.”

Even when people do have a face-to-face relationship with somebody, there can be a profound sense of awkwardness around tipping this time of year — how to approach it, whether it’s appropriate, how to know how much to give.

“If it’s something that someone’s not familiar with, if you’ve never done it before, it’s easy to feel awkward doing it,” Senning said. “People worry about doing it right or wrong. As long as you can get yourself in the right spirit, it really is something that I like to encourage people to give a try.”

There are all sorts of online holiday tipping guides out there for those who might feel like they have no idea where to start. But sometimes the suggested amounts can feel daunting, especially during a time of year when expenses are already adding up fast, with presents and travel and other holiday spending.

For people in that situation, it’s worth remembering that a holiday tip “doesn’t have to be a lot of money, but a little bit of money, a handshake, a nice handwritten card, goes a long way,” Rossman said. “These are generally hard-working, underpaid members of our local communities.”

For Yolanda Brown Pearson, who is making decent money now, but very much remembers the time in her life when she wasn’t, that’s exactly why it feels important to give back this time of year.

“I do what I can afford,” she said. “I have what I have, and I give from what I have. No stress, no challenge. Just give it, it’ll come back to you.”