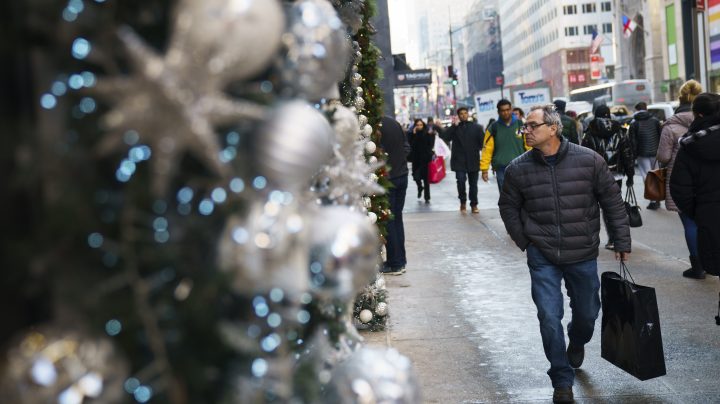 It is officially the holiday season, which, for a lot of people, means financial stress.

Several recent surveys found that a significant number of Americans not just feel the pressure, but also end up overspending during the holidays. Nearly two-thirds of adults feel that pressure to spend more than they’d like, or more than they have on holiday-related things, according to a survey from Bankrate.com. Another poll, from CreditCards.com, found that nearly half of people with credit cards consider the holidays an acceptable reason to go into debt. And SunTrust Banks’ annual holiday survey found that 68% of Americans plan to put at least half of their holiday spending on a credit card.

Millennials are the most willing to put holiday expenses on credit, according to the CreditCards.com survey, though only by a hair — 52%, compared to 49% of GenXers and about a third of boomers.

“I think there’s a few things going on here with millennials,” said Rossman. “One is that a lot of millennials have young kids, and that is a powerful force for spending around the holidays. It goes deeper than that, though. There’s a spillover effect. A lot of millennials have student loans. They have early career salaries, they have other financial pressures that have them pretty close to the edge.”

Gifts tend to be where people spend most of their money, but “it’s not just on gifts,” said Brian Nelson Ford, a financial well-being executive at SunTrust Banks. “It’s also on food and drinks, on travel, outfits, and even home decor. A lot of folks are feeling that pressure to spend more than they have.”

Parents are particularly susceptible. More than 70% said they’ve spent more than they’re comfortable with on presents, and 65% of those with kids under 18 said they’d be willing to go into debt for the holidays.

“Parents are a lot more likely to overspend, and a lot more likely to be stressed about money around the holidays,” Rossman said. “A lot of it is just a simple answer, it’s because they want to give their kids a good time. Some of that I would argue too though, is that there’s a lot of year-round expenses associated with parenting, and that a lot of these people may already be feeling some financial pressure.”

“There’s a lot of pressure, especially if you’re lower income and maybe increase your income, to provide lots and lots and lots of presents,” she said. “They feel guilty that their children are deprived, their kids are going to school without the fancy shoes, or the fancy clothes, or the fanciest phone. And so whenever they start getting more income, and they can afford more discretionary spending, they go overboard.”

There are also just all those subtle and not-so-subtle messages everywhere this time of year to spend, spend, and spend some more. Commercials, Christmas displays going up in stores before Halloween has even passed, Black Friday and Cyber Monday specials, Small Business Saturday.

“Stores are just overwhelmingly pushing you to buy,” Red said. “Stores understand that pressure you have to acquire and give. So they’re stretching that season as long as possible to encourage people to buy as much as possible.”

It can be hard to resist, in such a gift-giving culture at such a gift-centric time of year. But it’s worth remembering, Nelson Ford said, that a lot of people are also feeling the pressure to spend more than they want, and feeling stressed about it. Just naming that, talking about it openly, he said, can make a big difference.

“By getting it out in the open, it actually takes that pressure off not only ourselves, but others, because they’re thinking the same thing.”

The last thing you want, the thing that ends up happening to a lot of people who dip into their emergency savings or put things on credit over the holidays, Red said, “is you come off the holidays, and you just sort of wake up. It’s New Year’s Day, you wake up and you realize, I spent all my savings. And now I’m starting over. And all I have are gifts that don’t look nearly as exciting now that I’m not in the store with soft lighting and holiday music in the background.”

Are you feeling stressed about spending money over the holidays? Have you ever gone into debt because of holiday spending? Let us know using the form below. A Marketplace reporter may get in touch.