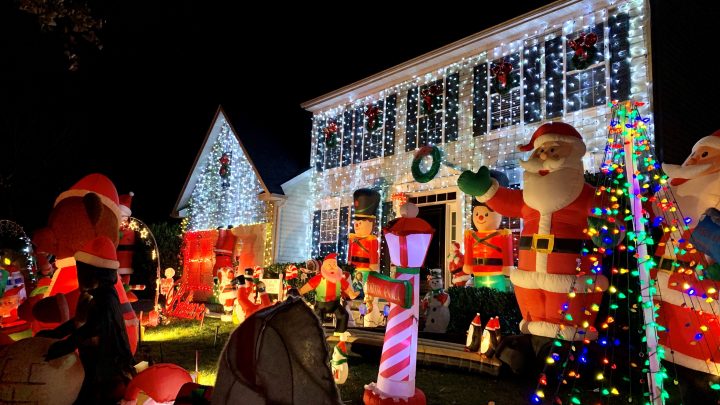 Robbie Mamula had run out of extension cords. That was a problem because he had several inflatable yard decorations left to set up before the big lighting ceremony in a few days.

“I had to put one down yesterday, which was disappointing,” he said. “I’ll probably have to go buy one just to get to 40.”

The deceased was a life-sized Santa holding a beer. Its fan had given out, leaving one less inflatable resident of Mamulaville, the Mamula family’s annual lighting extravaganza in the Baltimore suburb of Severn, Maryland. The front lawn was already crammed with three 15-foot Santas reaching all the way to the second floor, an R2-D2 in a Christmas hat and a plush teddy bear that hugs.

Mamula, 48, said it all started when he and his wife moved into their white colonial-style house more than a decade ago. The first year he bought a couple of reindeer. “And every year since I’m that guy that’s doing Christmas Eve shopping, but I’m not shopping,” he said. “I’m looking for inventory of what’s going to be on clearance the next day or two after Christmas.”

Most of Mamula’s collection is made by a Texas company called Gemmy Industries. Before inflatables came along, Gemmy was best known for creating Big Mouth Billy Bass, an animatronic singing fish on a plaque that was a popular gag gift at the turn of the millennium.

“He was inspired by those giant inflated gorillas that you see outside of car dealerships,” Harris said. “His idea was, how do you turn that into something that the residential consumer can decorate with?”

Early prototypes were inflated with hair dryers, which would overheat and burn out. Eventually Gemmy patented a fan that could run for months at a time. Regular polyester wouldn’t inflate well, so the company worked with fabric mills to develop a special coating.

In 2001, Gemmy launched its first Airblown Inflatable, an 8-foot tall Santa Claus. “He was actually quite primitive,” Harris said. “He had the big triangle of white fabric between his legs to give enough support so that he could stand up.”

The designs have come a long way since then. At Gemmy’s showroom outside Dallas, Harris flipped a switch and dozens of lifeless forms rose from the floor.

“Pretty much any vehicle that we can have Santa flying in works, so the hot air balloon, the sleigh, the helicopter,” he said.

At retailers like Home Depot, Lowe’s and Walmart, a Gemmy product costs anywhere from $15 for a small polar bear to around $200 for a giant Snoopy driving a Zamboni. Gemmy is a private company, so Harris wouldn’t discuss sales, but “I think it’s safe to say we have 90, 95 plus percent market share,” he said.

“Whereas two-thirds of it might have been twinkle lights at one point, two-thirds of it today are things like blowups,” she said. “Everything is just bigger, louder — in my view, a little bit tackier.”

Back at Mamulaville, Robbie Mamula insists his neighbors don’t mind. He and his wife have a deal: She handles the inside decorations; he gets to do whatever he wants outside.

“This is trashy, because it’s obnoxious,” he said. “We’re classy inside.”

This year he’s coveting one of Gemmy’s latest innovations, a high-tech inflatable snow globe that plays scenes from “National Lampoon’s Christmas Vacation.” But that would set him back another $200. Mamula, a turkey salesman for Butterball, guesses he’s already spent north of $5,000 over the years, including electric bills.

“But it’s fun,” he said. “If you can’t walk by Mamulaville and smile, then you’re Scrooge. Bah! Humbug!”

There’s an inflatable for that, too. A 12-foot Pumpkin Scrooge for Halloween goes for about $50.