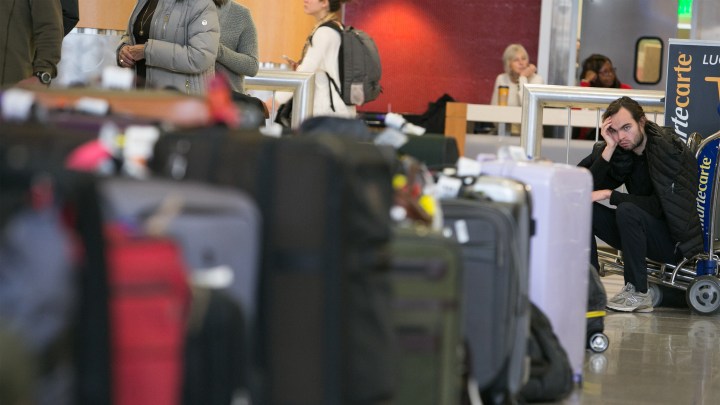 Airlines are expecting a record 31.6 million people to fly this Thanksgiving break, about 4% more than last year. The Thanksgiving travel period is always a logistical nightmare for airlines. One way they try to cope is to make sure they’re fully staffed. It’s all hands on deck.

“The airlines do their best to limit the number of employees who are out,” explained Henry Harteveldt, president of Atmosphere Research Group, a travel industry market research firm.

It’s also all aircraft on deck: the airlines try to get most of their planes in the skies during peak holiday times. Airlines are adding 859 more flights per day to handle all the extra demand this year. But Southwest, American and United have Boeing 737 Max jets in their fleets, and can’t use them because they’ve been grounded for months after two fatal crashes. So, Harteveldt said, they’re flying their other planes more often.

“It’s like someone trying to squeeze the very last drop of juice out of a lemon to make lemonade,” he said.

Customers on airlines that don’t use the Max can expect typical, packed holiday flights.

“For the typical consumer, they won’t see any impact on prices or their ability to head home for the holidays,” said Hayley Berg, an economist at the mobile travel app Hopper.

But they may not arrive on time. Airlines are more likely to wait for passengers on late connections because, with flights so full, those people would be stranded.

“You have a real problem because you can’t just re-accommodate them on a later flight,” said Joseph Schwieterman, a former airline official who now teaches transportation at DePaul University. “Everything is full for the rest of the day.”

Schwieterman said the biggest problem caused by the Max will probably be more cancelled flights. That’s because if a plane has a mechanical issue, there may not be another one to take its place.

“You can’t find another plane to spare, you can’t juggle this flight for that flight and you know, sort of improvise because everything is out there flying to the full extent,” he said.

About a quarter of the flights on the Sunday after Thanksgiving last year were either cancelled or late, according to Transportation Department data. And that’s back when the airlines were still flying the 737 Max.