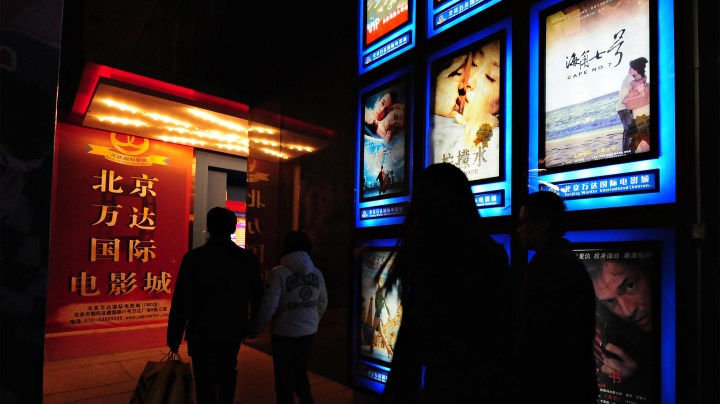 COPY
Moviegoers make their way to a multiplex cinema in Beijing in 2009. Frederic J. Brown/AFP via Getty Images

Moviegoers make their way to a multiplex cinema in Beijing in 2009. Frederic J. Brown/AFP via Getty Images
Listen Now

The upcoming sequel to “Top Gun” may strike many moviegoers in the summer of 2020 as an aerial tribute to American military might, yet several sharp-eyed fans who have seen the trailer are asking if Paramount Pictures is actually doing the bidding of China.

The controversy has to do with the flag of Taiwan. Some background:

In the original 1986 film, the Maverick character played by Tom Cruise often sported a leather bomber jacket that belonged to his late father. The jacket is decorated with patches of his dad’s Navy tours. One patch shows multiple flags, including that of Taiwan (white sun at the top left corner), a close U.S. ally in the 1960s before Washington instead recognized mainland China in 1979.

Here’s the Taiwanese flag in the famous kissing scene:

But in the trailer for the 2020 sequel — “Top Gun: Maverick” — we see the same actor. Same character. Same jacket. Similar patch.

“It’s highly likely to my mind that that change was made with a view to making it easier to gain access to the Chinese market,” Tom Secker, an entertainment industry reporter at the watchdog website Spy Culture, said. “The Chinese film market is now one of the biggest in the world, and so they have the most clout.”

That change was made … to gain access to the Chinese market.

The Chinese government in Beijing does not recognize Taiwan and regards it as a breakaway province. In fact, Taiwan sovereignty is a red line for Chinese censors who choose which international films to let in.

“For the Chinese market, a Taiwanese flag would be a non-starter,” Ying Zhu, film scholar at Hong Kong Baptist University and City University of New York-Staten Island. “It’s not allowed on any screen on mainland, period.”

With “Top Gun: Maverick,” Paramount Pictures brought on a Chinese investment and marketing partner, Tencent Pictures. Many analysts assume the studios themselves chose not to show the Taiwanese flag in a preemptive decision, to stay on the good side of Chinese authorities.

“These days, Hollywood and its Chinese partners know the playbook and what are the lines they should not cross,” Zhu said.” Ultimately, self-censorship is the rule of the game.”

“Marketplace” contacted the studios. Paramount Pictures did not respond. Tencent Pictures chose not to comment.

The images brought harsh criticism from U.S. elected officials and commentators critical of the Chinese communist regime, and of multinational companies perceived of caving to Beijing’s desires to enter the China market.

“I think Hollywood’s got to take a good look at itself in the mirror, and say ‘OK there’s a big market here,'” said Kent Harrington, a retired CIA analyst who has written about Chinese influence and the movies. “‘But we aren’t just representing our shareholders. We’re also representing the country.'”

“Hollywood’s got to take a good look at itself in the mirror … we’re also representing the country.”

These could be the new “China Rules,” given the importance of the market, according to several Hollywood veterans.

“The market is the biggest international market outside of the U.S.,” said Steve Bruno, a former executive on the Asia team at Sony Pictures, who got the first James Bond film (“Casino Royale”) approved to be shown on the mainland. “Its revenue contribution is so important that studios really need a film to be released in China, and to perform in China.”

In years past, Hollywood studios added or subtracted scenes specifically for films adapted for Chinese theaters. For instance, the version of “Iron Man 3” for Chinese moviegoers shoehorned in an extra scene starring Chinese female superstar Fan Bingbing (the change was panned as “pointless” and plot-challenged in the state-owned People’s Daily).

Now, editing decisions to satisfy Beijing are showing up in global versions of films that everyone around the world sees. Bruno, now the CEO at Emerge Pictures, said that’s because picky Chinese citizens who can influence box-office or regulatory outcomes on the mainland can see every version of every film or trailer, with the advent of global social media.

“With WeChat and social media, people are seeing things online,” Bruno said. “And if they react in a negative way, it could put a film on its back foot in terms of its chances of passing censorship.”

“If [Chinese citizens] react in a negative way, it could put a film on its back foot in terms of its chances of passing censorship.”

Changes on the big screen may reflect a broader cultural shift in the world. For decades after World War II, movies shown around the world reflected a distinctly American view of the world and what heroes and villains looked like, several Hollywood veterans told “Marketplace.” That is now changing.

“There were always editorial decisions based on what American audiences wanted,” said Janet Yang, the executive producer of “The Joy Luck Club,” who brokered early sales of American films into China. “Now, they’re taking into account what Chinese audiences want. It’s tickets.”

Whereas critics accuse Hollywood of cozying up to an authoritarian regime in Beijing, industry veterans counter that studio decisions have everything to do with business, and nothing with politics.

“If you’re a studio executive, you probably wouldn’t want your villain in the story to be someone from China — that’s probably going to affect box office,” said Bennett Pozil, executive vice president at East West Bank who has helped negotiate cross-border film deals. “But I don’t think it’s, oh, because it’s China. If there was another territory that was growing by leaps and bounds, it would be the same exact thing. I think it’s just kind of feeling out the sensitivities of different countries.”

In the “Top Gun: Maverick” sequel, some critics of the leather jacket scene in the trailer blame not just Paramount Pictures, but another participant in the artistic process: the United States Navy. The Navy granted filmmakers access to warships and fighter jets, and in return Paramount Pictures gave the Navy some say over the script. According to the Pentagon’s production assistant agreement with Paramount Pictures:

“The Production Company will consult with the DoD and CNAF [Commander, Naval Air Forces] in all phases of pre-production, production, and post-production that involves or depicts the U.S. military.”

“I don’t know if the admiral responsible for signing off has taken a look at this,” Harrington, the retired CIA officer, said. “But if he signed off on airbrushing U.S. military history in Asia out of the picture, maybe he needs to go back to Annapolis for a refresher history course.”

In a statement to “Marketplace,” the U.S. Navy Office of Information indicated it played no role in the trailer’s jacket scene:

“As always, we focused our support on ensuring the Navy and our core values were represented accurately in the film. That support did not extend to approval of various patches worn by the film’s actors, and we weren’t consulted for the movie trailer patches.”

There’s one more contemporary film at the center of the Hollywood-China debate: DreamWorks Animation’s “Abominable.” The movie features a personable Yeti who turns up in China. One scene reveals a map depicting the Chinese government’s version of disputed waters.

“The map includes the ‘nine-dash line’ in the South China Sea, which is a colloquial term for a Chinese maritime sovereignty claim that is widely disputed by its neighbors,” said Aynne Kokas, media studies assistant professor at the University of Virginia and author of the book “Hollywood Made in China.”

The decision angered Vietnam, who disputes the ‘nine-dash line’ and chose not to show “Abominable” in the country. The movie also has not been screened in Malaysia: the government asked the film distributor Universal to cut the controversial map scene, but Universal declined.

Kokas said the “Abominable” business arrangement between an American and a Chinese studio is known as a co-production, which gives the Chinese business partner significant influence over the content.

“The filmmakers are subject to Chinese government oversight from the very beginning stage of the film,” Kokas said, “from the process of pitching an idea all the way through to the final cut.”

In the U.S. “Abominable” won the box office in its first weekend, taking in more than $20 million. It flopped in China, yet Beijing arguably got the map it wanted revealed to a global audience. The China Rules are now widely known in the entertainment world, and in some cases they’re mocked.

In a recent episode of HBO’s “South Park,” the main characters film a scene that mentions a liver transplant, at which point the director interrupts.

“Cut! Cut! Listen guys, we just got word from the Chinese censors. They don’t want us mentioning organ transplants.”