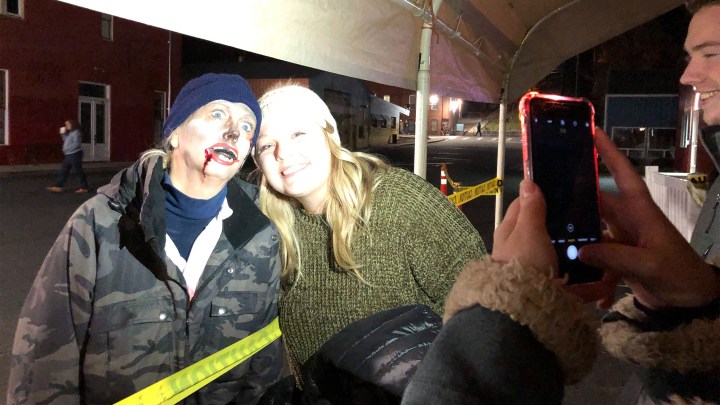 COPY
People snap pictures with zombie Monica Burleson. She drags a foot around the streets of Haunted Palouse and tries to get scares and starts as patrons wait to get in line for the haunted houses and hayride. Anna King/N3

People snap pictures with zombie Monica Burleson. She drags a foot around the streets of Haunted Palouse and tries to get scares and starts as patrons wait to get in line for the haunted houses and hayride. Anna King/N3
Listen Now

Every Halloween season for nearly 20 years, Palouse, Washington (population of 998, according to the last Census) has transformed itself into “Haunted Palouse.”

A lot of rural communities struggle after timber or mining booms go bust. But Palouse residents say it has turned its annual Halloween fundraiser to its advantage.

Two haunted houses and a haunted hayride — all created and staffed by residents — attract thousands of visitors, some of whom come from hours away. This year, tickets cost $25.

“I feel like it’s worth the money that you spend here,” said Cheyenne Smith, a sophomore at Washington State University in nearby Pullman.

This year’s Haunted Palouse brought in $88,000 that will go towards making improvements in the town. Janet Barstow, one of the event’s founders, said the money the event’s generated over the years has made Palouse a better place.

“We’ve got new equipment at the playground,” said Barstow. “And the community center, and the skate park.”

The event also brings the town’s residents together. Face paints and cans of fake blood littered the mayor’s desk inside the city council chambers, where a couple of volunteers were trying to get their zombie hair just right.

Haunted Palouse started as a response to a flood that devastated the town’s Main Street in 1996. But librarian Bev Pearce said that even before the flood, the town had some rough edges.

“There were cracked sidewalks and tilting telephone poles,” Pearce said.

Some of the improvements the event has paid for have helped to attract new shops, a restaurant downtown, even new residents.

“Palouse is bucking the trend,” said Robert Franklin, a historian at Washington State University Tri-Cities. “Many of the towns around it, they are becoming more and more marginalized.”

Haunted Palouse helped the town build a $500,000 community center seven years ago. This year, it will help pay off the mortgage.