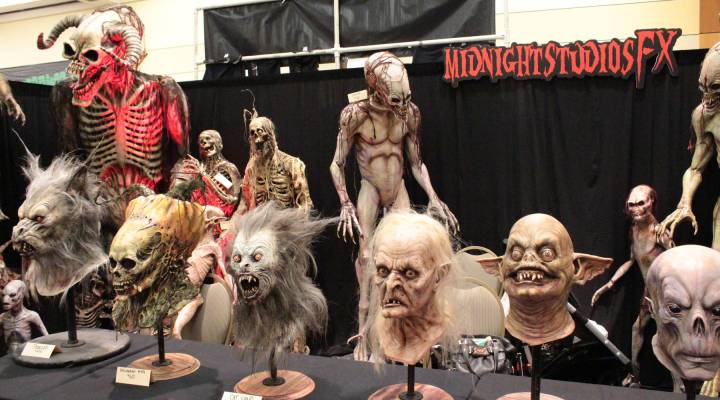 COPY
A display of masks at Monsterpalooza 2013. Ayleen Gaspar/Flickr

A display of masks at Monsterpalooza 2013. Ayleen Gaspar/Flickr
Listen Now

Here among the crowds of freakily dressed people at Monsterpalooza at the Pasadena Convention Center, Yvonne Solomon stands out. Not because of the red dress she’s wearing, with a plunging neckline. It’s the large old-fashioned baby carriage she’s pushing. In it are four distinctive creatures:  “These are my were-pups,” she said. “They’re silicone, handmade little pieces of art.”

Were-pups.  Baby were-wolves. Solomon paid an artist $650 a piece for these creepy-looking critters. At this gathering of fellow monster fans, she’s assured a sympathetic reception for her investment. Horror fests like Wizard World and Shuddercon take place every weekend, all around the country. People happily fork over pricey admission fees for the chance to mingle with like-minded mutants and monsters.

“You’re in a big hall with a bunch of people you don’t have to explain yourself to,” Keith Rainville said, who is here selling vintage Mexican and Japanese horror tchotchkes. “We’re all from the same mothership that dropped us off in this weird world.”

Rainville is one of 200 vendors here, selling one-of-a-kind pieces, like what Paul Lazo brought from his little shop of collectibles in New York: “He is a severed head with a bloody pan and he’s damn handsome.”

Well, maybe he was.  You can take him home for $500.  Sixty bucks is the price tag for a small sculpture of TV character Mamma June of Honey Boo Boo, reinvented as a zombie by special effects guy Norman Meyers.

“I cut her head off and hollowed it out, so you could keep pens and sculpting tools in there,” Meyers explained. “And I used actual couscous for the vomit coming out of her mouth.”

Make-up artist Joe Korts is manning a huge glass display that resembles the Clinique Counter at Macy’s—until you look closer.

“This wound I have on my hand here is done with our ‘Fresh Scab and Scratch’,” he said. “It’s a thick paste that dries as you put it on, it dries in about thirty seconds, and in about five minutes you have a nice bloody gash.”

A snarling, scantily clad woman in a cage was on display to promote a new exhibit, Gorlesque. Creator Pete Metzger is hoping to score in a lucrative subset of the Halloween business: the $300 million a year industry of year-round haunted houses.

“We wanted to make our haunt different than anyone else, so we’re making it the sexy haunt, it’s sexy meets scary,” Metzger said.

For $35 a ticket, it’s a steal.  Some high-end haunted houses charge upwards of $85 for the latest in fright. Passively watching horror films, explained fan Sydney Frank, is as outdated as Godzilla.

“You can only see the same white chiseled jawed guy mow down complete strangers in a battlefield so often, and people want a different feeling,” she said. Feeling scared to death, she added, makes you feel so alive.

Even if costs you.