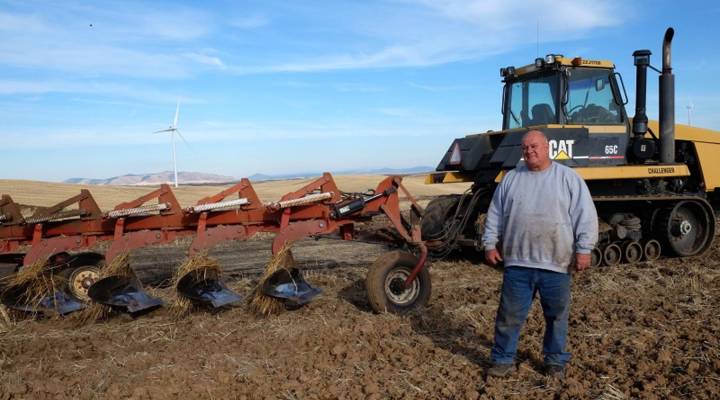 COPY
Farmer Larry Brown grows wheat just outside of Oakesdale, Wash. He says this year he lost around $85,000 because of low falling number in his wheat.  Anna King

Farmer Larry Brown grows wheat just outside of Oakesdale, Wash. He says this year he lost around $85,000 because of low falling number in his wheat.  Anna King
Listen Now

Many Washington and Idaho wheat farmers are struggling this year because of a weird crop problem — that’s eating away the starch inside kernels. That’s on top of a low worldwide price for grain.

Outside Oaksdale, Wash., the windblown Palouse hills roll out, where Larry Brown’s plowing. “I’ve had problems,” Brown said. “We’ve all had problems with falling numbers in the past — but nothing this severe and this widespread”

“Falling number” means there are enzymes in a kernel of wheat that have eaten away at the starch. That happens when there’s rain late in the season, or there are wild temperature swings in the summer. It hasn’t been this bad here since the early 1980’s. When wheat doesn’t have enough starch, it affects the baking quality. And so bakers in places like Japan won’t buy it.

“You haul it to the elevator and they tell you it’s worthless,” Brown said.

Brown is $85,000 short of breaking even. And a large swath of Washington and Idaho farmers have problems too.

In Pullman, Wash., at Washington State University’s USDA Western Wheat Quality Lab,  Alecia Kiszonas, a federal research biologist, gives a tour.  “Unfortunately, one kernel with low, low-falling number can bring down a much larger batch of wheat,” Kiszonas said. “Which is why this is such a problem.”

It smells great here. Kiszonas explains this lab is where they bake 4,500 batches of batches of cakes, noodles, cookies and pasta to test wheat’s baking quality.

Blenders whir and beakers measure out water and eggs for a Japanese sponge cake. All this good-smelling baking is purely for science — it’s headed to compost when the scientists are done with it.

Asian sponge cake is supposed to be light, fluffy. But much of this year’s wheat is making stuff that’s dense, heavy and small, Kiszonas said. And that won’t cut it in Japan. “No, that is highly unacceptable,” Kiszonas said.

The bottom right cake shows what happens when wheat with low “falling number” is used to make Japanese sponge cakes. The cake becomes dense, falls in the middle and can even form holes when baked.

The Philippines, Japan and other Asian countries are the Northwest’s top wheat customers.

About 40 percent of the soft white wheat tested so far from this season’s harvest has low falling number problems.

A lot of Northwest wheat winds up at a large grain cooperative in Genesee, Idaho. This is where it comes before being sold across the globe. Large trucks pull in and load grain regularly out of the elevators, trucking it around the region.

Sammie White manages grain coming in and going out. When low falling number wheat is mixed with the good wheat, it can cause problems.

Sammie White is one of the managers at the Pacific Northwest Farmers Cooperative in Genesee, Idaho. He says in a small town it’s hard to tell his neighbors and friends their wheat has problems and they won’t get paid what they expected.

“We didn’t know who had problems and who didn’t have problems,” White said. “So, they were all going into these big silos.”

Now White has millions of bushels of grain all mixed up. And it will all fetch a lower price — some may end up as cattle food.

“Realistically there probably will be a couple of guys that will be put out of business because of it — and that’s tough,” White said.

And it’s tough even for those who will survive this season.

Wheat growers have already had some lean years, said farmer Brown. He won’t be buying new harvesting equipment and he’s even cutting back on fertilizer for next year.

“This is where you really bear down and you’ll go without,” Brown said.

Brown lumbers up the metal stairs to get into the cab of his tractor.  It’s time, he said, to turn the wet earth over, and put this year behind his plow.