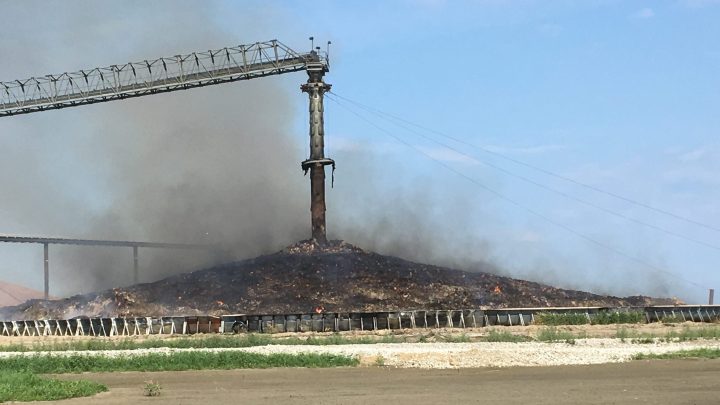 COPY
This pile of soybeans, once 650,000 bushels, has been burning since mid-July. (Peggy Lowe for Marketplace

This pile of soybeans, once 650,000 bushels, has been burning since mid-July. (Peggy Lowe for Marketplace
Listen Now

Following catastrophic spring storms in the Midwest, flood waters still haven’t receded near many parts of the Missouri and Mississippi Rivers. The federal government estimates the cost for recovery and rebuilding will be in the billions. Those costs are continuing to climb, and it has been tough to assess the damage since so much of the area is still under water.

The prolonged flooding has caused some problems that officials say they haven’t encountered before. The flooding soaked 650,000 bushels of surplus soybeans piled outside of a commercial grain elevator in Missouri, causing the crop to rot. The heat generated by the decaying beans, mixed with the summer sun, made the pile spontaneously combust. It’s been burning since mid-July. Fire officials have decided the safest way to manage it is to just let it burn.