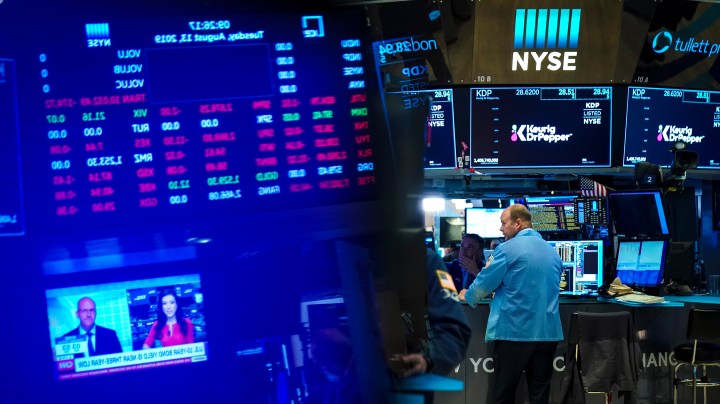 Traders and financial professionals work on the floor of the New York Stock Exchange (NYSE) at the opening bell on August 13, 2019 in New York City. Drew Angerer/Getty Images

Traders and financial professionals work on the floor of the New York Stock Exchange (NYSE) at the opening bell on August 13, 2019 in New York City. Drew Angerer/Getty Images

An economic alarm bell has sounded in the U.S., sending warning signs of a possible recession ahead.

Yields on two-year and 10-year Treasury notes inverted early Wednesday, a market phenomenon that shows investors want more in return for short-term government bonds than they do for long-term bonds.

It’s the first time that has happened since the Great Recession and it can be a sign that investors have lost faith in the soundness of the U.S. economy.

What appeared to be a slight thaw in trade relations between the U.S. and China that had sent markets sharply higher Tuesday was quickly forgotten Wednesday.

At the opening bell the Dow tumbled 400 points.

The yield on the benchmark 10-year Treasury note hit 1.622%, falling below the yield of a 2-year, which was 1.634%. The last inversion of this part of the yield curve began in December 2005, two years before the Great Recession made landfall.

An inversion like the one taking place Wednesday has preceded the last nine recessions dating back to 1955, though it doesn’t always mean recession is imminent, as in 1966 when no recession formed after an inversion.

When a recession might hit, if it does, is tricky. Months or even years have passed after an inversion takes place, and before economists can connect the two.

But the crossing of the 2- and 1-year Treasury sent a ripple through U.S. markets Wednesday.

The cost of gold, considered a safe haven for investors, traded well above $1,500 per ounce and continued to climb.

With fears of a global economic slowdown growing even sharper, the price of crude, already down 10% in the past three months, fell more than 3%.

Longer-term yields have been falling due to anxiety that President Donald Trump’s trade war could derail the global economy.

Other parts of the curve had already inverted, beginning late last year. But economists in each instance have cautioned not to make too much of it.

The latest inversion, however, is considered more of a tripwire.

Uncertainty over what comes next in the trade war could unnerve businesses and consumers enough that they begin cutting spending. Consumer spending accounts for about 70% of economic activity in the U.S.

That could start a vicious cycle where companies cut back on hiring, which feeds through to more damage for the economy.

On Wednesday, Macy’s became the first major retailer to report quarterly earnings. The company fell vastly short of expectations and cut its profit expectations for the year. Its shares plunged 16% and it dragged down the entire sector, with companies like Nordstrom, Kohl’s and the Gap leading the S&P in losses. 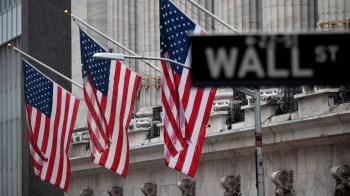