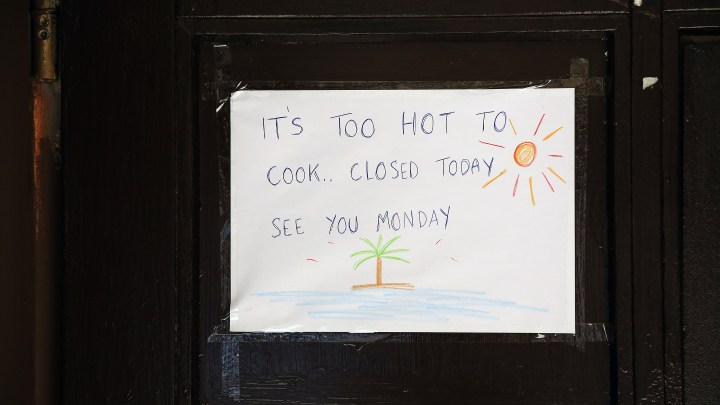 COPY
A Berlin restaurant closed on June 30 due to the heat wave. Adam Berry/Getty Images

A Berlin restaurant closed on June 30 due to the heat wave. Adam Berry/Getty Images
Listen Now

Europe is getting back to normal after a blistering heat wave at the end of  last month. The Continent experienced its hottest June since records began, around a hundred years ago, with France, Spain, Italy, Germany, Austria, Switzerland and the Czech Republic all sweltering under temperatures in excess of 100 degrees Fahrenheit. In one small town in southern France, the mercury hit 115 degrees — the highest ever recorded in that country and far exceeding the 104-degree level at which potentially fatal heat stroke can set in.

Fatalities that are thought to have numbered less than 100 were far fewer than in the deadly heat wave of 2003 that claimed an estimated 70,000 lives across the Continent.

Relieved at the relatively light loss of life, Europe is, nevertheless, fretting about the impact of the heat wave on the Continent’s economic backbone: its roads, railway tracks and other physical infrastructure.

“The infrastructure in France does struggle a lot when temperatures get this high,” Emma James, a journalist with the state-owned television network France 24, told the BBC. Some rail tracks buckled in the heat, forcing trains to go slower. “There have been lots and lots of delays. One train from Paris to Clermont was 11 hours late,” James said.

It wasn’t just rail travel that suffered, and it wasn’t just France. There were power outages across the Continent as parched citizens scrambled to switch on fans and air conditioning units and many workers were sent home early. In Germany, the authorities feared that the asphalt or bitumen in the road surfaces of certain highways was beginning to melt, so they imposed emergency speed restrictions.

All this was taking its toll on European output.

“Heat waves make it harder to work, so it can slow down economic activity. Europe is not immune from that sort of economic impact,” he said.

Ferguson’s research suggests that extreme weather events — freak storms and flash flooding as well as heat waves — now cost some European economies up to 2% of lost output a year — tens of billions of dollars.

And it could get worse, according to Timothy Hewson of the European Centre for Medium-Range Weather Forecasts.

“It’s widely accepted that heat waves are becoming more common and will become more common along with other extreme weather events as a result of global warming,” Hewson said.

Europe has gotten that message. Graham Edmond, senior vice chairman of the Institution of Civil Engineers in Scotland, said European countries are beginning to protect their infrastructure from climate change. There are a lot of mitigating measures that can be implemented, especially when it comes to the rail network on which Europe depends heavily.

“You can do things like introducing expansion joints to make sure, for example, that railway lines are more capable of dealing with the high temperatures,” Edmond said.

And there are also ways of preventing roads from melting.

“It’s about making sure that the mix of stones and aggregates and bitumens is more able to withstand the high temperatures,” he said. “One simple thing we can do is learn from the road building techniques used in countries that normally have very high temperatures.”

Europe is certainly learning lessons from its own recent experience of extreme weather. Anxious to avoid the high death toll from the 2003 heat wave, the French government took a very proactive approach this time. Paris authorities installed temporary fountains and mist machines around the capital to help the baking citizens cool off. The Health Ministry set aside special cool rooms for the elderly in public buildings across the country and city officials handed out bottles of water in the street.

It worked. While 15,000 people died from the extreme heat in France in 2003, it’s believed no more than a few dozen lives were lost in the country this time.

But John Ferguson of the EIU said that in spite of Europe’s relative wealth and resilience, the latest heat wave has exposed the whole Continent’s continuing vulnerability.

“Countries in Europe cannot have infrastructure systems that break or buckle or decline when an extreme weather event happens,” he said. “Protecting the infrastructure is a vital way of mitigating the economic impact of climate change.”