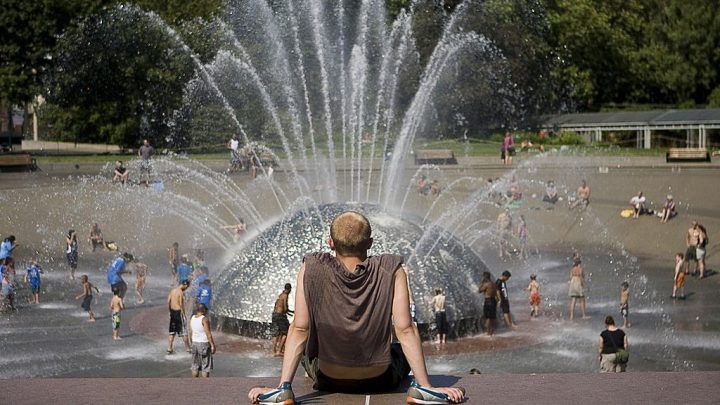 COPY
A heat wave is scorching the Pacific Northwest. In Seattle, only about 44% of homes have air conditioning. Stephen Brashear via Getty Images

A heat wave is scorching the Pacific Northwest. In Seattle, only about 44% of homes have air conditioning. Stephen Brashear via Getty Images
Listen Now

Cady Voge is suffering through a third day of triple-digit temperatures in Seattle, where air conditioning is becoming more common, though still only 44% of homes have it.

“I have two box fans and some of those little ice packs that you put on an injury or something, which I actually just put in the bed near me or on top of me,” Voge said.

And climate change means more people need air conditioning in more places for more of the time. So it’s probably a good thing that in Washington, D.C., Congress is thinking about improving the country’s infrastructure, including the electric grid.

Though a bag of frozen peas may help with help with the heat in the short term, it can’t mitigate the dangerous effects of climate change, said Sean Sublette a meteorologist with the nonprofit Climate Central.

“These incidents of extreme heat are going to become more numerous, and so the demand for air conditioning is only going to be climbing further,” he said.

Climate Central estimates that home air conditioning use will increase almost 60% over the next 30 years.

“That kind of scares me,” said Roshi Nateghi, an engineering professor at Purdue University. “It sounds to me like a very unsustainable way, right, because we are again fueling what is causing this.”

The infrastructure deal now being discussed would dedicate $73 billion to “power infrastructure including grid authority,” but leaves out big investments in renewables.

Still, Jennifer Amann with the American Council for an Energy-Efficient Economy said there are ways to improve air conditioning now.

“I think it’s a mix of, right, these low-tech and high-tech solutions, the old technologies and the new,” she said.

Amann said that better insulation and windows can help, and we can make air conditioners even more efficient.