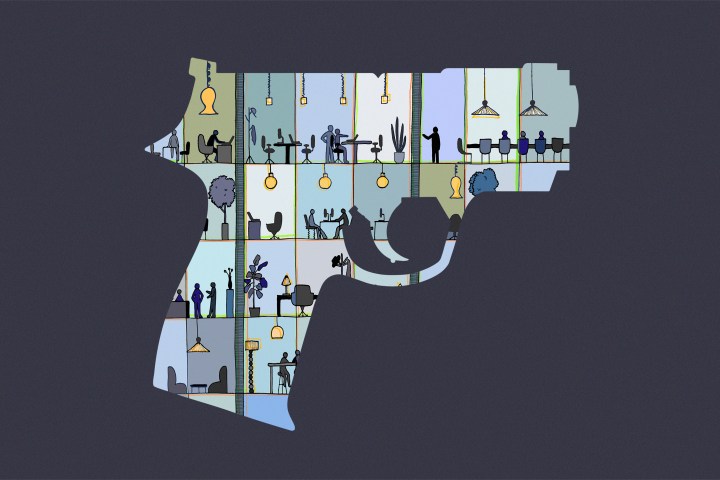 Every year in America, more than 300 people go to work and never make it home because of a workplace shooting. In 2017, the number of people intentionally shot dead at work was 351, the Bureau of Labor Statistics reported. The year before, that number was 394.

As gun control bills continue to die in Congress and mass shootings dominate headlines, employers have started to take notice and entire industries have been created around workplace shootings, from active shooter insurance policies to workplace violence experts.

And according to those experts, most employers are not doing enough to prepare for potential workplace violence incidents.

They say there is more to workplace violence prevention than just preparing for the worst-case scenario; that many employers tack on active shooter training to their fire drills instead of devoting it the time and attention it requires.

Earlier this year, he and a number of other experts spent two days in San Antonio at the Workplace Violence Prevention Symposium 2019, where about 200 human resource and security professionals were in attendance.

“One of the most essential things you can do for your people is train them,” Sem told attendees.

Industry-wide, the belief is that workplace violence prevention must start long before an incident has a chance to occur. Employers at the symposium were encouraged to reach out to risk assessment experts who can come up with customized training, work with local enforcement agencies to get a risk assessment and work on response time and plan escape routes.

As Sem walked up on the stage in Austin, the title of his presentation was displayed in large red letters on the screen in the corner. “Culture and Complacency: Overcoming the ‘It Won’t Happen Here’ Mentality on Workplace Violence.” He says he hears that a lot, the “we never thought it would happen here” bit, especially after shootings.

Sem says that one of the reasons why companies don’t have a thorough workplace violence prevention training is because they don’t believe that workplace violence is a problem in their offices. However, as numbers collected by the Department of Labor show, workplace violence goes beyond the staff. Statistics show that disgruntled customers can pose a risk, too.

In 2018, a woman killed three people at YouTube headquarters after she became frustrated with company’s policies. Other workplace violence incidents can involve staff’s family members and be related to personal problems or domestic violence.

While not all of these deaths could have been prevented, Sem says there are some things companies can do to keep these incidents to a minimum.

“When I talk about the 30-plus shootings and stabbings that I was brought into, plus other incidents of violence, I find that about half of those were random acts of violence,” he said. “In other words, it was an event that no one could anticipate. But the other half of those events, there were early indicators. There were some warnings signs that were not managed, that were not reported.”

About 75% of workplace harassment goes unreported, according to the US Equal Employment Opportunity Commission.

That number worries Catherine Mattice Zundel, an expert on workplace bullying and president of Civility Partners. She is often called in to work directly with workplace bullies to change their behaviors. But most of the time she is called in after an incident has occurred.

The number of unreported incidents of harassment shows that there is still a large lack of trust between employees and employers, Zundel says.

“Many organizations do employee engagement surveys, that’s a hot topic right now in HR,” she said. “But those surveys will never tell you whether or not whether is bullying or harassment. The questions just aren’t geared in that direction.”

Sometimes people don’t report being bullied because it’s not viewed the same as harassment and most companies do not have a workplace bullying policy. Zundel defines bullying as an abusive behavior at work that created a power imbalance between bully and the target.

Sometimes bullying can escalate into violence, from either the bully or the victim trying to get revenge. To prevent the situation from getting that far, employees must feel comfortable reporting any inappropriate behavior.

“You have to create a culture of respect and dignity and understand that if you do not respond to a complaint of workplace bullying, employees probably won’t tell you about illegal behavior either because they can see that behavior doesn’t matter,” Zundel said. “Your reaction to complaints like that really dictates whether they trust you.”

“The culture is important because we want people to report and we want them to report early,” he said. “The culture an organization develops or fosters can help or hinder that. If there’s a culture that employees know if I go to H.R., or I report on the anonymous line, that they’re going to take me seriously, and that they’re going to investigate properly and respond appropriately — they’re more likely to report.”

Another way to help keep abusive behaviors to a minimum in workplace is to cultivate a culture of civility, says Sem.

“I find that civil and respectful workplace is a safe workplace,” he said. According to Sem, managers should lead by the golden rule: treat others the way you want to be treated. “Your employees are like children, they learn by example. If the example you present to them is confrontational and aggressive, they are going to be confrontational and aggressive. I see that all the time.”

This is especially true when it comes to terminations. When firing people, do it kindly and try to skip the perp walk if possible – no guard standing over the terminated employee as they pack up their stuff, said Sem. Also, to make sure there is no lingering resentment, a work friend should check in with the person in questions within a few days, he added.