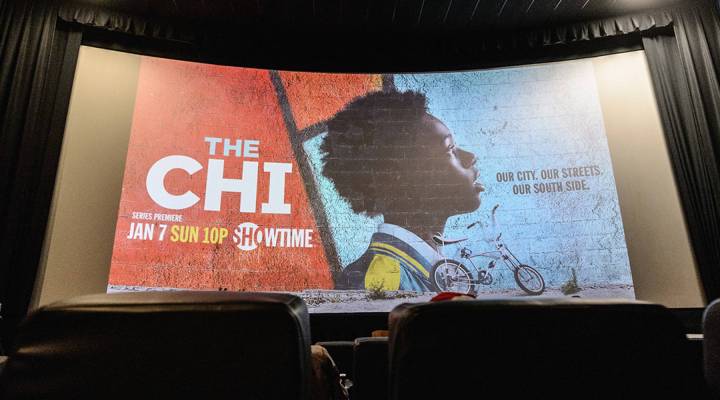 COPY
An advance screening of Showtime's 'The Chi' on Chicago's South Side at SMG Chatham in 2017. Daniel Boczarski/Getty Images for Showtime

An advance screening of Showtime's 'The Chi' on Chicago's South Side at SMG Chatham in 2017. Daniel Boczarski/Getty Images for Showtime
Listen Now

Showtime series “The Chi” is set in the South Side of Chicago, which is historically an African-American neighborhood, and tells the stories of the people who live there. Its creator, Lena Waithe, is originally from the South Side herself, so the neighborhood is in the show’s production DNA as much as it’s in the show’s storytelling. Ayanna Floyd Davis is the showrunner for the second season of the show. Marketplace host Kai Ryssdal spoke to Davis about running “The Chi” and her career in Hollywood. The following is an edited transcript of their conversation.

Kai Ryssdal: Talk to me about this — a very broad question with which to start, but I’m going to roll with it. How did you get where you are?

Ayanna Floyd Davis: Oh, Lord. I will say this, my big break came when I moved to LA. I was working in investment banking. I then got into the Walt Disney Writing Fellowship, and it’s a really great fellowship where they pay you to write. They pay you a stipend. They give you tickets to Disneyland. It’s really pretty cool.

Davis: Yeah, Disneyland is really expensive. So I was really hyped about that. But anyway, I got into that fellowship program and that led to my first staff job on “Gideon’s Crossing,” which was really kind of “House” before “House” was “House.”

Ryssdal: I know more about TV than I thought I did. Holy cow. “Gideon’s Crossing” and “House.” Holy cow. And here you are now running a not-insubstantial show where you have some oomph in this industry, and it’s interesting because you are a woman of color with influence and power in a town where that’s a new thing.

Davis: Isn’t that great? I’m pretty happy with that. No, look, it’s been a journey, it’s been a ride. And it’s a great time to honestly be a woman of color.

Ryssdal: Can we talk about the show for a minute? “The Chi,” season two. I want to talk specifically about Chicago as a character in this program. Not so much the actual people, but the city and the South Side is a narrative in and of itself. And obviously that came from season one and the folks who created it. I wonder though how you think of it as the woman running the show. You’ve got a city now which is, you know, just in a straight news context, troubled, right, with an interesting new mayor on the horizon. But, you know, crime is an issue there and inequality. How do you think about the city as a character?

Davis: Well, first of all, I to live in Chicago on the South Side at 29th and King Drive.

Ryssdal: To be specific.

Davis: So, you know, I saw behind the headlines, and I’m not saying that the headlines are justified, but fortunately for me, none of that touched me. I mean, Chicago was a very aspirational time in my life. I was in grad school. So my relationship is different, and I think that’s what I was trying to bring to the show, is like it’s not all shoot ’em up, bang bang.

Ryssdal: So how do you do that? Does it affect how you stock the writer’s room, for instance, and develop the themes of the program? As the showrunner, how do you bring your experience to bear?

Davis: Well, yeah, you definitely start with the people that you bring into the creative process. I mean, I wanted a show about people, and I wanted a neighborhood drama, and I wanted to feel like we’re just peeking inside someone’s window and kind of watching them live. So there was a lot of care and attention taken to that. I mean, one of our writers on staff was a former Chicago police officer who patrolled the South Side. So he brought his own experiences kind of walking that line of being a black man on a police force that has had sometimes an antagonistic relationship with black men. So it was just a lot of things that I tried to bring together in the hopes that we could just add more specificity to this show.

Ryssdal: How do you learn how to do this? Showrunning?

Ryssdal: Is it just, learning on the way.

Davis: Well, different people learn different ways. You know, some people get thrown into it. Some people, you know, get the job and don’t know what they’re doing. You know what I’m saying? I mean, a lot of television is bad for a reason. But for me it was brick by brick. I’ve been doing this for a while. And, you know, I’ve worked with some pretty big names in television, some pretty big showrunners, and it was a lot of sitting back and learning and mistakes and writing, a lot.

Ryssdal: So now you’re one of the people who in 10 or 15 years, some new person sitting in this spot across from whoever’s hosting this show, they’re going to say, “Oh, I sat back and I listened to Ayanna Floyd Davis.”

Davis: Well, like younger people. You know, they may not be showrunners but they’re moving along.

Davis: Yeah, or they’re writers on shows or producers on shows. When I was coming to the business, there weren’t people like me in the business. You know, I can count the number of women, I can count the number of black women, black people on one hand. I can tell you who they were. You know what I mean? And now, you have social media where showrunners have public profiles and you can DM one of them or follow them on Instagram.

Ryssdal: You’re opening yourself up here. This is gonna air, and you’re going to be swamped, I’m just saying.

Davis: But so that’s great. That’s awesome. You know, but it also creates a sense of kind of instant celebrity and that anybody can be a showrunner, and I’m not saying, like, showrunning is some mythical unattainable thing. It’s just that people skip over the work because sometimes I see some of it and I’m like, oh, God, like, you know, you’re cutting yourself short.