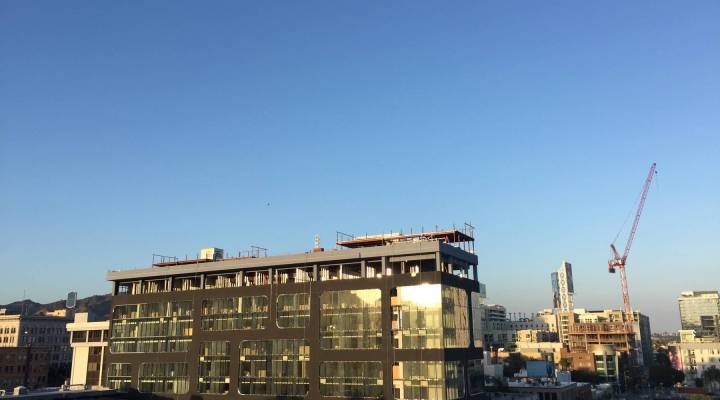 COPY
Construction of a new hotel near the intersection of Hollywood and Vine. Jennie Josephson/Marketplace

Construction of a new hotel near the intersection of Hollywood and Vine. Jennie Josephson/Marketplace
Listen Now

The face of urban America is changing. Who lives where and why, has everything to do with our shifting culture, urban development and of course, economics. So for our new series “At the Corner Of” we’re visiting neighborhood corners around the country to talk to people about what’s happening. For our first stop, we went to the intersection of Hollywood Boulevard and Vine Street to find out what’s going on in the heart of Hollywood.

On movies that have documented the neighborhood:

I think of “Pretty Woman” which was shot in 1990 and you know, Julia Roberts worked Hollywood Blvd, and it was seedy and there were cops and there were murders and that was dramatic, but it might have been the most realistic part of that movie.

On development and change in Hollywood:

It’s funny Hollywood traditionally has been thought of as a tourist area, and what we’re really seeing it become is more of a neighborhood, which in think is great.

-Jospeh Mariani works for the Hollywood Property Owner’s Alliance, a non-profit that encourages development in Hollywood

On people in Hollywood that are not happy about the recent commercial and real estate development:

Yeah no, I think they’re seeing it from, in my own opinion, it’s from a myopic lens of just traffic, right, that they’re seeing it from the traffic lens, the traffic is increasing and that is true, but there’s also a lot of good things that come with turning into a neighborhood. For instance, a lot of the retail mix has changed in Hollywood, whereas before it was primarily t-shirts and tourist souvenir shops right, we’re starting to see more residential businesses come in, you’ve got pressed juicery, Dunkin Donuts, and a CVS pharmacy across the street here.

-Jospeh Mariani works for the Hollywood Property Owner’s Alliance, a non-profit that encourages development in Hollywood