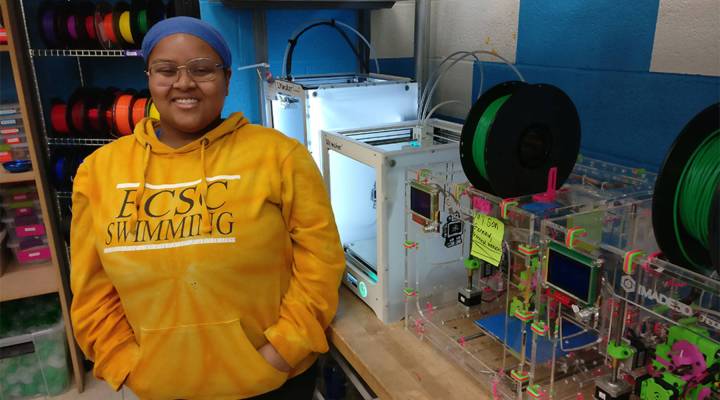 Training for tech jobs isn’t happening across all demographics. Today, women and people of color are entering tech fields at lower rates than in the 1990s. But N’Dera Muhammad, a 16-year-old in Baltimore, was determined to learn some 3D printing skills. After trying to teach herself to code, she found hands-on help at the Digital Harbor Foundation. This is her story.

My name is N’Dera Muhammad. I’m 16 years old, and I’m from Baltimore, Maryland. The first computer I had that I remember was like white and green and had the ears that flipped up. You could play games on them, and it was a really kiddy computer. I remember getting barbecue sauce on it.

Then when we saw that 3D printing is stuff that they do, it was cool. It was fun, and 3D printing was a thing of the future and it was like, this is something you guys can do. I learned the basics of most of the 3D printers that we work with, and I learned how to fix some of them. Sometimes you don’t know what you’re doing, and you just have to test a bunch of things and see what happens. There’s one printer — it always gets clogged, and you just got to figure out if it’s the nozzle. We have to end up trying 20 different things. It’s kind of simple and hard at the same time.

If you’re in technology, sometimes you feel isolated because you feel like,”It’s my problem, it’s my code. I don’t know what I’m doing.” But the thing is, if you find the right environment, you could have more of a collective mindset and say, “It’s my problem, yes. Can you help me?” I’m realizing there’s a lot more resources to help you, too. Now everything’s on YouTube. So if I really get stuck enough, I’m going to YouTube.

My family plays a big part of my life, and if my older sister didn’t find this place for me and my siblings, we wouldn’t be here. And if my mother didn’t push us towards going here, we wouldn’t be here. Even though at one point it was like, “Yo, I want to quit so bad.” “No, don’t quit because if you quit, you gonna leave me here by myself.” So it was like, we were there for each other. I want to open up my own fabrication shop. And so if I have a company that comes to me and they’re like, “We have this event coming up and we need figures and we need signs,” I want to be able to do that. Like vinyl cutter? OK, and I got you. I got some 3D printing, I have a laser cutter. I can do this.

Unfortunately, closing the digital skills gap still does mostly seem to be the purview of nonprofits, states and cities. You probably heard a lot yesterday about the president’s proposed budget request. It does provide about $100 million to the Department of Education for STEM grants related to science, tech and math education. But it also proposed, for the third year in a row, to kill NASA’s Office of STEM Engagement, which runs the famous Space Camp and also gives grants, scholarships and fellowships with a focus on women and underrepresented minorities.

NASA’s Office of STEM Engagement has produced astronauts like Leland Melvin, who was drafted to play football for the Detroit Lions, got hurt and ended up in NASA’s Graduate Student Researchers Project. He’s taken a shuttle to the International Space Station twice since then. The Washington Post published a piece about the NASA program the last time the Trump administration tried to kill it, as well as a piece on this year’s proposed cuts.