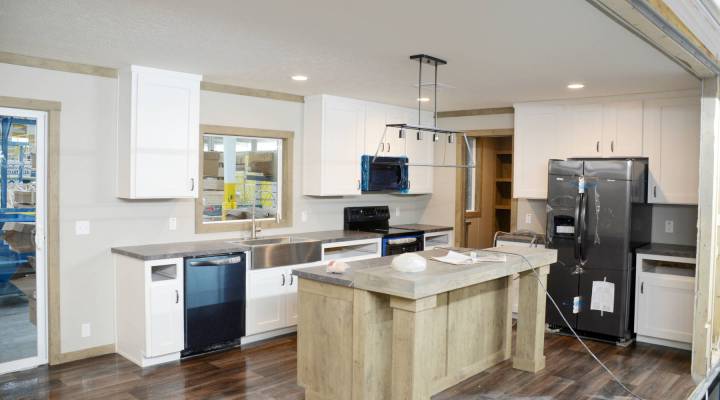 COPY
A nearly-finished house, divided in two halves, is about to be rolled out the factory doors. Amy Scott/Marketplace

A nearly-finished house, divided in two halves, is about to be rolled out the factory doors. Amy Scott/Marketplace
Listen Now

At a factory in Athens, Texas, outside Dallas, a newly-built house — or, more accurately, one half of a house — was about to be rolled off the assembly line. “House rolling,” workers shouted, as a horn blared, warning people to get out of the way.

A house is prepared for shipment at a Clayton Homes factory in Athens, Texas.

The Aimee, as the model is called, has three bedrooms and two bathrooms, dark wood floors (or linoleum that looks like wood) and rustic beams on the ceiling. It could be any modern house, split down the middle. Only the whole thing — floors, walls, wiring, plumbing and roof — was put together inside a 166,000 square-foot factory, where it was now headed out the giant doors on a trailer.

The plant is one of 40 operated by Clayton Homes, the largest manufacturer of prefab houses in the country. This year the company, owned by Warren Buffett’s Berkshire Hathaway, expects to turn out 50,000 homes, up from about 47,000 last year. That’s about half the industry total. “Right now, we’re rolling six floors a day offline, three houses,” said production manager Richard Dannheim. “From start to finish, it’s usually about four to five days.” Building a traditional house on-site, he said, takes months.

Roofs are constructed side-by-side inside the factory, and then hoisted with cranes onto the frame.

The quick turnaround is one reason affordable housing advocates are taking a second look at prefab homes, which were long associated with subprime loans and flimsy construction. Another reason is the price. A three-bedroom, two-bath Clayton Home starts at $159,000, plus land costs. A typical factory-built house costs as much as 50 percent less per square foot than a traditional home, said Alanna McCargo, vice president for housing finance policy at the Urban Institute. “The quality and the properties themselves really have improved,” she said. “There’s a lot of opportunities, I think, to look at manufactured housing very differently and for it to get back on the scene in a more meaningful way to help with the affordable housing crisis.”

It’s also an opportunity to cash in. After a long slump, industry sales have been growing the past several years. According to U.S. Census data, shipments have increased from a low of around 50,000 houses in 2009, to nearly 97,000 in 2018.

But old reputations are hard to shake, which is why Clayton recently launched a national ad campaign called “Prefabulous.” In a TV commercial, a young woman walks into an empty factory, where a house magically takes shape, with high-end features like a fireplace, state-of-the-art kitchen and freestanding bathtub.

The industry is also getting a boost from a change in how the houses are financed. Historically, factory-built homes have been paid for with “chattel” loans, which often carry higher interest rates. But recently Fannie Mae and Freddie Mac have started funding traditional mortgages for manufactured houses, which could bring costs down for borrowers. “That’s a dream come true for this industry and it’s going to be a game changer for housing over the next several years, as you’re able to get more homes out there below $200,000,” said Kevin Clayton, CEO of Clayton Homes.

From the plant in Athens, the two halves of the Aimee would be wrapped in plastic and trucked down the highway to be “married” on a foundation somewhere. Dannheim pulled up the order on an iPad. Destination: Lufkin, Texas, about 90 miles down the road.