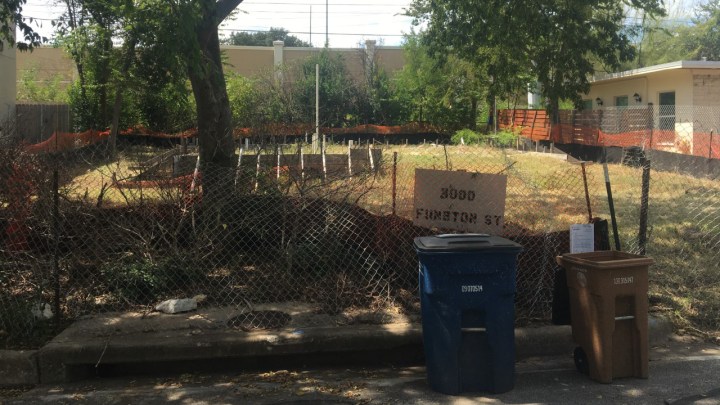 COPY
A judge forced the city of Austin to stop construction on a lot it owns at 3000 Funston St. more than a year ago. Audrey K. McGlinchy

A judge forced the city of Austin to stop construction on a lot it owns at 3000 Funston St. more than a year ago. Audrey K. McGlinchy
Listen Now

The city of Austin, like many cities, has recognized it does not have enough affordable housing. It’s been trying to find ways to build more. One of its goals is to create more mixed-income neighborhoods by putting low- and moderate-income housing into wealthier areas. But a recent lawsuit illustrates how hard this can be.

In a wealthy neighborhood in West Austin, there are large, single-family homes. Nice lawns, too.

Then, there’s this lot: The address is 3000 Funston St. It’s vacant except for some lumber and overgrown bushes. It sticks out from the rest of the neighborhood, attracting attention. It’s also attracted a legal battle.

“I knew that it was involved in a lawsuit and that the city owned the land and what could be built there was contested,” said Nick Comiskey, who lives down the street with his wife. She’s in finance and he’s a pastor.

The city of Austin has owned this lot for five decades. Since early 2020, it’s been trying to build a three-bedroom home there. The plan is to sell it to a low-income family for less than $300,000 — in a neighborhood where homes go for a million.

But before workers could finish the foundation, neighbors sued, claiming that building this home is illegal and potentially dangerous. A judge has ordered the city to stop construction.

On its face, this is a story about one house. But in Austin and cities like it that have struggled to build affordable housing in rich neighborhoods, 3000 Funston is the site of a bigger question: How do you weigh the rights of neighbors to say what gets built next door?

The area where some of the richest people live is home to just 5% of Austin’s affordable housing stock. That’s where 3000 Funston is located.

“I think one of the issues is a question of space,” Connolly said. “Right? A question of, you know, the distribution of who has access to resources and opportunities.”

Austin’s trying to fix this by building tens of thousands of homes for low-income families over the next 10 years. And building them in areas with good schools and nice parks. That includes the neighborhood surrounding 3000 Funston.

Trey Jackson is the lawyer for the neighbors. He also lives a couple of doors down from 3000 Funston.

Jackson wouldn’t agree to an interview. But in a brief email, he said this case has nothing to do with affordable housing. Instead, he said, it’s about two things.

First: flooding. This part of Austin floods during heavy rains and Jackson argues adding a house could make it worse. He also argues the lot is too small; that second reason has to do with what are called deed restrictions, or restrictive covenants.

Eliot Tretter, a professor at the University of Calgary, has researched restrictive covenants in Austin. “And oftentimes they’re extremely specific,” he said.

These documents say what can or cannot be built on the land you own. “A deed can say this is the minimum sale price,” Tretter said. “This is the maximum. This is the color.”

The Funston lot where the city is trying to build is too small to meet the covenant requirement — it’s about 1,000 square feet short. City officials declined the opportunity to do an interview for this story. But in court, city lawyers argue Austin needs this affordable home.

Since the lawsuit was filed, the city put the house out to bid again — and the price of construction has almost doubled.

By September, the weeds at 3000 Funston St. were so high that it had started to look like an entirely different landscape. You couldn’t even see the partial foundation. You’d think no one ever lived here. Or ever would. We’ll know for sure after the full case is heard this winter.