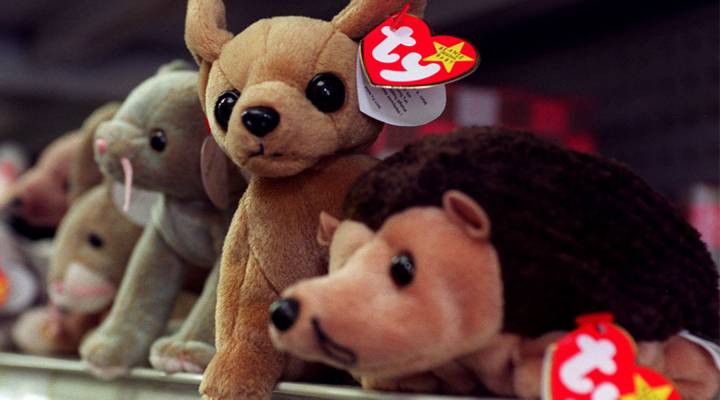 COPY
The Beanie Baby craze in the '90s is an example of hobby investing. Joyce Naltchayan/AFP/Getty Images

The Beanie Baby craze in the '90s is an example of hobby investing. Joyce Naltchayan/AFP/Getty Images
Listen Now

There are a number of interesting places people park their money to diversify beyond stocks and bonds. “Hobby” investing is a way for people to stash a little cash in something they enjoy. Back in the ‘90s, there was the Beanie Babies craze. Some people invest in jewelry and classic cars.

But these days, some hobby investors are seeing an uncertain economy and falling consumer confidence show up in their investments, too.

Mike Kraus, an artist in Rochester, New York who also buys and sells other artists’ work, says he’s been seeing other art buyers hesitate when news emerges about the trade war with China, or the recent government shutdown.

“I might have a buyer that will come out to me and say, ‘I’m really interested in purchasing art, but let’s just wait and see what’s going to happen first,’” Kraus said.

In fact, he says he’ll sometimes notice economic trends show up in the art market before they show up in other economic indicators.

“If I have higher sales in January and February I’ll start noticing that the stock market picks up, or job reports are picking up,” he said. “It indicates things are going in that direction before they actually happen.”

Some economic trends can push people into hobby investing. Tim McClarren started buying up bottles of wine in 2004. The wines were all first-growth Bordeaux, and McClarren said he was betting that an improving Chinese economy would make those wines more valuable.

“It had done incredibly well from 2005 to 2008,” McClarren said. “It took a downturn. But it’s come back strong.” He says roughly 10 percent of his portfolio is wine.

McClarren tracks wine prices through an online exchange called BBX. Lately, he says prices have softened. China’s economy is slowing down, but he said there’s an even bigger factor scaring buyers: Brexit.

The U.K. is one of the world’s biggest wine markets, and given that tariffs on wine could go up, McClarren said the market has gotten uncertain. Still, he thinks wine investments will do well in the long run.

“The whole reason I invest in the wine is I want to resell it to somebody who’s going to drink it,” he said. “And then hopefully my other wine investments do better because there’s more scarcity.”

One notable hobby investment with an entire economy of its own: Magic: The Gathering cards. The fantasy-themed collectible card game has a 25-year history and a huge fan base. Players around the world gather together — at home or at Magic: The Gathering events — and battle each other with decks of colorful cards representing wizards and beasts.

Christine Carmack, the Magic: The Gathering event coordinator at The Brooklyn Strategist, says there’s a lot more to the game than simply playing it across a table.

“People will make trades to get cards they want, to try to get more valuable cards,” Carmack said. “It’s just another way of enjoying the game.”

Online communities and academic papers have sprung up in recent years, dedicated to the secondary market for Magic cards. Seth Robertson, a Magic: The Gathering player in Jackson, Wyoming, buys and sells cards online as a way to make money to fund the hobby, and creates videos about both playing and investing in the game. Other players, he said, invest by buying up several cards and hoping they go up in value.

“A lot of people go out and get them graded,” Robertson said. “They can say, ‘hey, this is a nine, nine point five out of ten, it’s in a case it’s never going to get damaged, you can throw it in a vault.’”

Some rare and powerful cards are now worth thousands. One card from the original release, called the Black Lotus, sold for $87,000 last year. A number of sites, like Quiet Speculation and MTG Stocks, let players trade cards and track prices. MTG Stocks even has a rolling price ticker.

A few months back, Robertson says, prices on a lot of cards started to drop at about the same time that stock markets saw a lot of volatility. The two could have been unrelated, but Robertson says he wasn’t surprised. Personally, he felt nervous buying Magic cards after looking at his sinking retirement account.

“It made me kind of take a step back and think, OK, I need to start putting more money into [the retirement account],” he said. “Maybe I should stop spending as much on eating out and playing Magic, and going to concerts.”