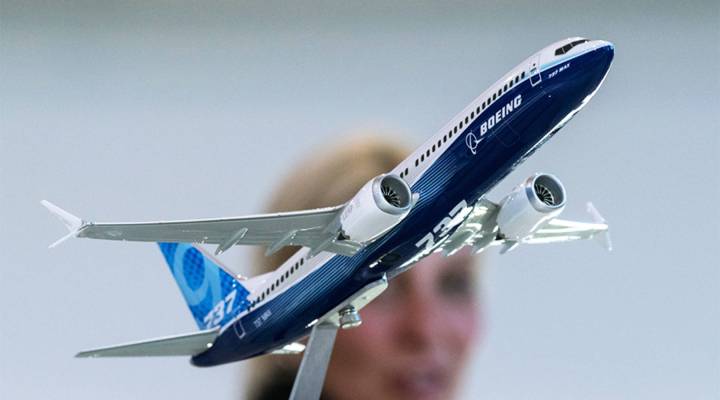 COPY
About one third of the 737 aircraft that Boeing builds are bought by Chinese customers. Oli Scarff/AFP/Getty Images
Corner Office

About one third of the 737 aircraft that Boeing builds are bought by Chinese customers. Oli Scarff/AFP/Getty Images
Listen Now

The Boeing Co. is a force in the global economy. Its America’s biggest exporter and the U.S. Defense Department’s second largest contractor. They’re coming off their best earnings year ever with revenue topping $100 billion in 2018. Marketplace host Kai Ryssdal talked with CEO Dennis Muilenburg at Boeing’s corporate headquarters in Chicago, Illinois. The following has been excerpted from their conversation.

On manufacturing in America today:

Muilenburg: I think being a manufacturing company in America today is harder than it’s ever been … The economy, the nature of work over time, it’s moved a bit away from manufacturing and building hardware. It’s moved more towards digital software, different sectors. And while we’re a very intense software and digital business we also build big complex hardware. There used to be more of that in this country.

Ryssdal: The president, for those who might not have seen the news either had just been elected or was about to be sworn in I forget exactly the timing. But the president went after Boeing for the Air Force One contract very early in his time, got on the phone with you, you negotiated a satisfactory deal with the president for the new Air Force One. I don’t want to get the merits of the contract. What I do want to ask you is this — do you think it’s appropriate for the president of the United States to be negotiating one-on-one with the CEO of a major corporation in this economy?

Muilenburg: Yes. I’ll tell you why. What it tells me is, one, he cares about business and he creates open communication lines and we will have differences from time to time, we may not agree on every topic, as we are dealing with things like China trade policy for example, we’re eagerly supporting the ongoing trade negotiations hoping to find a solution, one that’s not based on continuing tariffs. From my view, the big thing is he’s created an opportunity for business to have a seat at the table, we are part of the conversation. I applaud him for doing that.

On the Chinese market:

Muilenburg: Chinese traffic growth, passenger traffic growth, is growing at about 12 to 15 percent a year. It’s becoming the world’s largest commercial airplane market. About one third of the 737 aircraft that we build go to China and we have great relationships there with our Chinese customers. We have industrial partners there. COMAC [a Chinese state-owned airplane manufacturer] for example, builds parts on all of our commercial airplanes … and we also know that they are a future competitor. And that is the nature of doing business in China is there’s both competition and collaboration. That is a fact of how global operations work. China needs the airplane lift and while we are creating capacity in China we’re also creating manufacturing jobs in the U.S.

Boeing broke a few records for the company last year: They delivered a record 806 commercial airplanes and their 10,000th 737. The Boeing order backlog is at record levels too, reaching nearly 5,900 commercial aircraft in 2018.

To hear their full conversation, subscribe to the Corner Office podcast on Apple Podcasts.