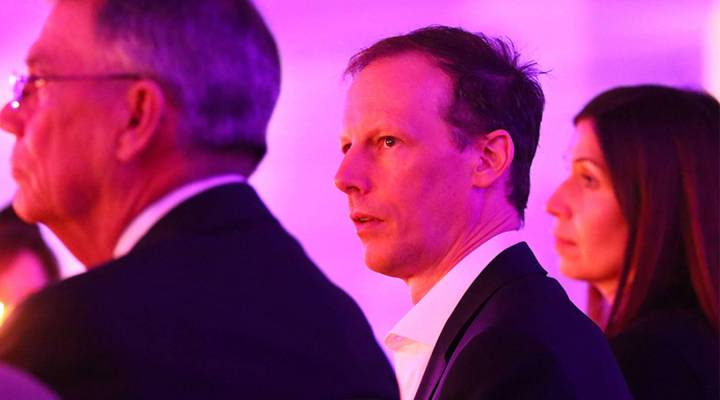 In the last week alone, digital media outlets have laid off hundreds of people. The publishers of USA Today are fighting off a takeover attempt. The Washington Post actually ran a Super Bowl ad about how important journalism is. But subscriptions don’t make enough money, and ads are annoying, data-sucking and don’t even work most of the time. Enter tech. Jim McKelvey is the co-founder of the payments and processing giant Square. He’s got a startup called Invisibly that’s part micro-payments where you pay for individual articles and part ad tech where you, the reader, can earn free articles by trading more data. Choose to pay for no ads at all or strike a balance somewhere in the middle. McKelvey told host Molly Wood the whole point is control. The following is an edited transcript of their conversation.

Jim McKelvey: [Content has] never been free. You’ve always paid for it, but you’ve paid for it with your attention, and it’s usually frustrating because you don’t have any control over how your eyeballs are bought and sold. They’re being bought and sold hundreds of times a day without your permission or knowledge. So here’s the deal: You don’t have to do anything differently. If you want us to just manage this for you, we will, but if you want to take control over how your attention is bought and sold, we’ll give you that control. So, for instance, you live in New York. Don’t sell me a pickup truck because I’m in New York. I’m not going to buy a pickup truck. I don’t need one here. That piece of information is valuable, and any piece of information you give does two things for you: First of all, it increases the relevance of the products that are pitched to you because you gonna buy some things, but more importantly it increases the value of your eyeballs. So you are getting paid more per second of attention.

Molly Wood: Or I can just buy my way out of it directly and skip that tailoring process?

McKelvey: Absolutely. Yeah. However you want to engage.

Wood: It’s interesting. It sounds like you’re making an argument that I should have more control of my data, but there’s a version of this that also sounds like I still give over a lot of data to individual sites.

McKelvey: Yeah, and it’s completely up to you what you want to do. So in our system from complete anonymity, which by the way will change the price of some user content. So, for instance, one of our publishers will sell you an article for a quarter cent if they know who you are. And that same article could cost three cents if they don’t know because they’re getting value out of your data as well. They want to know who their readers are.

Wood: It sounds like, if it really was embedded into a lot of different sites, it would become a large real-time experiment in trying to determine how much people actually do value their privacy, which I think we’re all trying to figure out right at this moment.

McKelvey: Yeah, and there’s no one answer for one person. So, for instance, there are times I value my privacy a lot. There are times I don’t. I’m about to buy a bunch of couches. If the couch manufacturers of the world knew I was about to spend several thousand bucks on couches, they would send ads to me that I would love to see right now. But the problem is, in the current ecosystem, I have no way of signaling that. And the worst case is I buy a couch and then they find out I bought one and then for the next three months I get chased by couch commercials. It’s really backwards and messed up right now. We’re not saying we’re going to fix it all at once, but we’re saying that we’re going to do this on behalf of the people whose information is the currency. Give me control of how I spend my attention just as I have control over how I spend the dollars in my wallet.