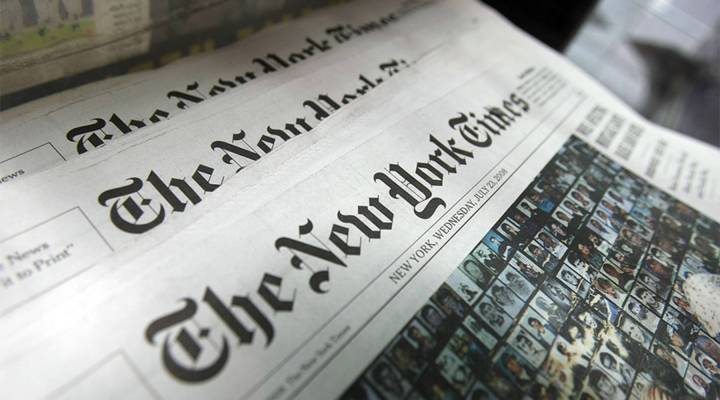 Update (Feb. 7, 2019): Marketplace aired an interview with former New York Times executive editor, Jill Abramson about her new book “Merchants of Truth: The Business of News and the Fight for Facts” on Feb. 4, 2019. On Feb. 6, 2019, Abramson was accused of plagiarizing portions of the book. Abramson talked to the Washington Post about the allegations.

“Jill Abramson’s “Merchants of Truth” is an important, exhaustively researched and meticulously sourced book about the media business in a critical moment of transition. It has been published with an extraordinary degree of transparency toward its subjects; each of the four news organizations covered in the book was given ample time and opportunity to comment on the content, and where appropriate the author made changes and corrections. If upon further examination changes or attributions are deemed necessary we stand ready to work with the author in making those revisions.”

2019 has already been a rough year for media companies. Gannett, the biggest newspaper publisher in the country, laid off as many as 400 people. BuzzFeed, McClatchy and Huffington Post cut hundreds of jobs in January, and on Feb. 1, Vice Media announced it’s cutting 10 percent of its staff.

It’s timely then, that Jill Abramson, who used to be the executive editor of the New York Times, has a new book out on the business of news. Disagreements with the publisher of The Times about how to transform the paper in the digital age was at the heart of why she lost her job back in 2014. Her new book, which is part memoir, part investigative narrative, chronicles the story of BuzzFeed, Vice, The New York Times and The Washington Post as they grapple with upheaval in the media business. It’s called “Merchants of Truth: The Business of News and the Fight for Facts.” The following is an edited transcript of Abramson’s conversation with Kai Ryssdal.

Kai Ryssdal: Why these four companies in this book? What was it about them?

Jill Abramson: Well, I wanted to pick four companies that all illustrated somewhat different crises. And when I started my reporting, Vice and BuzzFeed were the shiny new stars. Vice said it was going to “shove CNN off the map,” and you know, BuzzFeed was seen as competition to The Times and The Post because it had built a huge audience using Facebook.

Ryssdal: So — well, we’ll get to Facebook in a minute, actually — but when did you start reporting this book? Because as anybody who’s been following the news of the news, the news of the news business knows, the bloom is kind of off the rose for Vice. You know, BuzzFeed just had those big layoffs, so it’s not, you know, clear sailing for them by any means.

Abramson: Vice and BuzzFeed, you’re right, are having layoffs, and their news divisions seem to be in crisis. But with the “Trump bump” and digital subscriptions going up at both the Times and The Post, they’re more secure. I mean, The Post is owned by Jeff Bezos, who has given them a long runway to regain their glory days. You know, The Times is feeling good and hiring people and, you know, expand[ing] in all kinds of ways.

Ryssdal: A word here about Facebook since I mentioned it. I’m reading the table of contents here, and you’ve got chapters titled BuzzFeed I, Vice I, New York Times I, and then you go on and on — BuzzFeed, Vice, New York Times, Washington Post, Vice, BuzzFeed, and then boom, out of nowhere, Chapter 9 is Facebook. Why Facebook in a story about the news business?

Abramson: Well, because Facebook is the news business. You know, it’s not —

Abramson: Yeah, it horrifies me, that’s for sure. Facebook has become the dominant distributor of news stories. It’s effectively the biggest publisher ever known to man. So I thought Facebook needed to be all together.

Ryssdal: I want to talk about metrics for a minute. We can now measure what news people are consuming to nth degree. The Post, as you point out in this book, has had, you know, big screens in its newsroom about who’s clicking on what. Good thing or a bad thing for the business of news?

Abramson: Well, you know, I think it’s both. You know, why should editors, when the tool of something like Chartbeat is around, not know what news is most interesting to their readers or audiences? But I fear that reporters — and I include myself — we’re vain creatures. We’re a particular kind of tribe. And, you know, a Times journalist I saw recently admitted to me that when he’s not writing about Trump and Trump isn’t his headline, he doesn’t get the traffic. So, you know, it fuels and skews coverage in a way that’s worrisome.