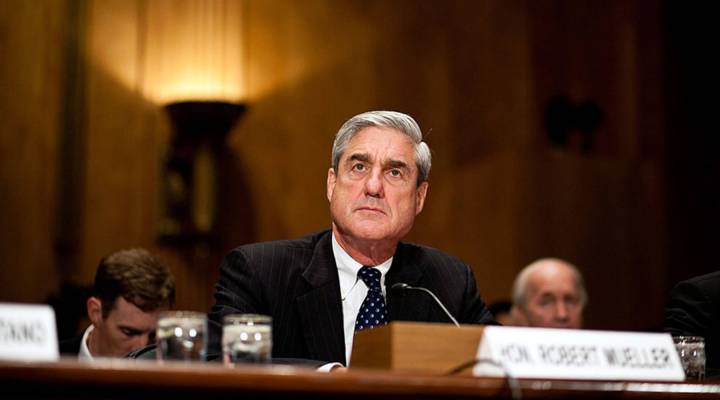 Robert Mueller, former director of the Federal Bureau of Investigation, testifies at a hearing on Capitol Hill on September 13, 2011 in Washington, D.C.  Brendan Hoffman/Getty Images

Robert Mueller, former director of the Federal Bureau of Investigation, testifies at a hearing on Capitol Hill on September 13, 2011 in Washington, D.C.  Brendan Hoffman/Getty Images

Special counsel Robert Mueller’s report has arrived at a bookstore near you.

The report is available for free on the Department of Justice’s website, but that hasn’t deterred publishers from racing to package it into book form for consumers to buy.

At the time of the report’s release on April 18, advance sales pushed “The Mueller Report: The Final Report of the Special Counsel into Donald Trump, Russia, and Collusion” from Skyhorse Publishing and “The Mueller Report” from The Washington Post into the No. 1 and No. 2 spots on Amazon’s best-seller list. Hard copies of the books were released April 30. “The Mueller Report: Report on the Investigation into Russian Interference in the 2016 Presidential Election” from Melville House was released on April 30.

The Washington Post’s book is currently No. 1 under paperback nonfiction on the New York Times Best Sellers list and has spent four weeks total on the list. Skyhorse’s book has spent three weeks on the list.

Government reports have been converted directly into books before. The 9/11 Commission Report, the Starr Report and the Senate Intelligence Committee on Torture were all made into books and sold to interested members of the public.

As with the Mueller Report, the Starr Report was released online. Web traffic doubled at that time and downloads crashed government servers. Even then, once the 445-page report was released as book, it became a best-seller. “I think people are buying our book as a collectible as well as perusing it at leisure,” a Starr publisher told the New York Times in 1998.

There may be a sizable reward for the publishers who opt to physically bind the contents of the Mueller Report. The print edition of the 9/11 Commission Report was ultimately released in 28 different versions and 1.17 million copies were sold.

The digital version of the taxpayer-funded report is what appears to be a scanned PDF of the full document. A book version might just be more user friendly, said Tony Lyons, president and publisher at Skyhorse, in an interview with Vox.

“Personally, I like printed books, well-designed and professionally produced, rather than a pile of paper,” said Lyons. “As far as the ebook version, it’s difficult to read a manuscript online unless it’s been properly formatted.”’

What about turnaround times for copy editing, typesetting and binding? It might be tough, but Skyhorse promised it would print and ship its edition to retailers in between three and five days. Jerome Corsi, a Skyhorse author, told Talking Points Memo that “they specialize in getting books out quickly and on the shelves.”

And the publishing houses aren’t entirely alone in the pursuit of Mueller-related action. “The Mueller Report” from The Washington Post (in partnership with Scribner), was also available for digital purchase on April 19.

It promised “exclusive analysis by the Pulitzer-Prize winning staff” at the Post, alongside a timeline of major events, a guide to key figures involved and a selection of documents pertinent to the investigation. An Audible version of the book is available on Amazon, as well as a version on CD, selling for more than $32.

The book publishers might have updated editions to release: House Judiciary Chairman Jerry Nadler subpoenaed the DOJ for a complete, nonredacted version of the report on April 19. Nadler also requested other materials absent in the initial release, including Grand Jury testimony and evidence.