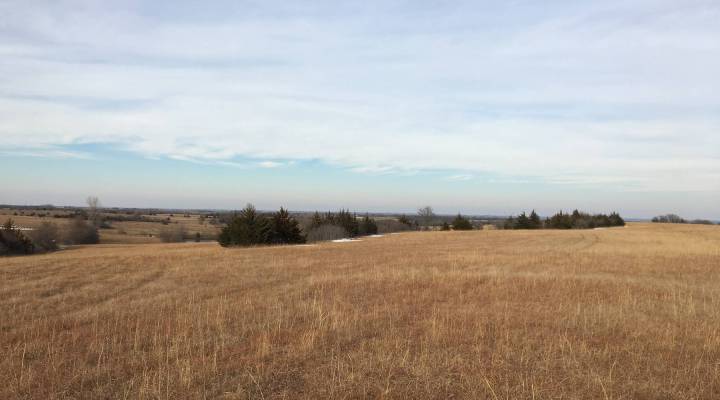 COPY
A pasture of pure blue stem prairie grass, never touched by a plow during the 150 years the Teske family has owned this piece of northeast Kansas. Peggy Lowe for Marketplace

A pasture of pure blue stem prairie grass, never touched by a plow during the 150 years the Teske family has owned this piece of northeast Kansas. Peggy Lowe for Marketplace
Listen Now

In a far corner of northeast Kansas, Donn Teske looks out at golden red rolling meadows covered with native bluestem prairie grass, never touched by a plow. Teske’s family has owned this land for 150 years and he still feeds his cattle on this land.

“You can look at the horizon and see that this really isn’t good for anything but grass and cows,” he said. But this last summer, the grass only grew to about half of what it normally does, because of drought, so Teske had a hard time feeding his cattle. He’s afraid the increasingly hot, dry weather will turn this pasture into buffalo grass, a lower-yielding and less nutritious feed that grows out on the High Plains to the west.

“We’ve got this beautiful bluestem grass,” he said, “if that becomes an environment of buffalo grass like they’ve got out in western Kansas, where’s your economic driver in that?”

A federal climate change report released last month by the Trump administration has dire predictions for the business of U.S. farming. The National Climate Assessment says that if steps aren’t taken now, by 2050 the Midwest could see agricultural productivity reduced to the levels of the 1980s without major technological advances.

Teske said he sees the impact of climate change on his farm and has worked on the issue as president of the Kansas Farmers Union. He worries about what’s been reported for years – that the Corn Belt is moving northeast because of hotter weather. He gave up growing corn two years ago, switching to sorghum, which is more drought tolerant, so more profitable.

“The frequency and intensity of the heat waves in the summers are expected to increase by mid-century,” explained Jim Angel, the Illinois state climatologist and lead author of the chapter on the Midwest in the national climate change study. “And I have to keep reminding myself that when I say mid-century, that’s not that far off.”

The report predicts that heat and poor air quality will take a toll on livestock and rising humidity will make it harder to grow crops, so yields will be reduced. But farmer Blake Hurst said he has a hard time believing that.

“We’ve had six years in a row above-trend corn yields in the Midwest,” Hurst said. “That’s never happened before.” Hurst, president of the Missouri Farm Bureau, lives about 100 miles east of Teske. Hurst’s reaction to climate change is different – he wonders if lowering carbon emissions is worth the economic cost.

Hurst said there are always bad weather years, but farmers manage, in part because technology has improved seeds, which also means it costs a lot more than when he started farming in 1978.

“For an 80,000-seed bag of corn, which is like two and a half acres worth of planting, we’re paying $342. Because I just got the bill and that’s a heck of a lot more than I was paying in 1978 for hybrid seeds,” he said. That’s one place where Hurst and the report agree. Production costs will be the most expensive piece for farmers in the future – pricey seeds, drainage systems for the wet springs and irrigation for the dry summers.

Angel said he’s talked to farmers for years about climate change and there’s a disconnect on the issue.

“What’s interesting to me is that, some people, the idea of climate change is, is off-putting,” he said, “but then they will turn around and talk about weather trends or how weather patterns have changed on their farm.”

What farmers fear most, Angel said, is what the solutions might be – say, more regulations or more taxes. But no matter their political stripe, farmers just want to keep the farm in the family. Teske calls it “obligation to your ancestors.”

“If we continue to have droughts like that or the arid zone keeps working its way east,” he said, “my grandchildren may not have the same opportunity on this land that I’ve had.”