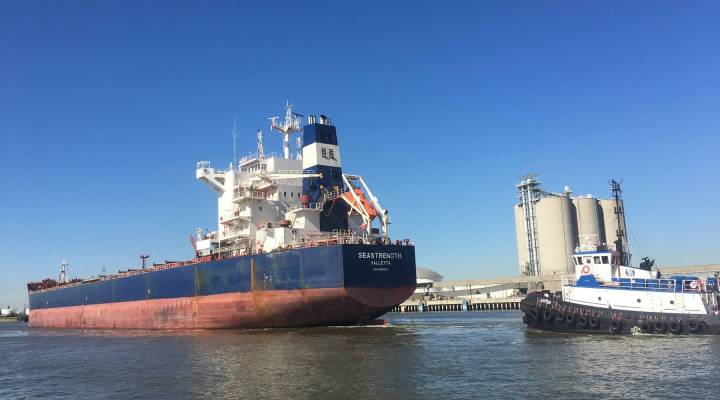 COPY
A view of the Houston Ship Channel. Travis Bubenik for Marketplace

A view of the Houston Ship Channel. Travis Bubenik for Marketplace
Listen Now

When hurricanes hit Texas, the effects ripple out across the country because the state accounts for about 30 percent of total U.S. refining capacity, with most of the refineries located on the Gulf Coast. And millions of tons of cargo pass through Houston’s port each year.

A years-long plan to protect all that industry from storms is now moving forward. Over the past couple years, the government has been analyzing different methods for protecting the coast and the possible impacts of those methods. A newly-released environmental analysis lays out the government’s preferred path forward, but it’ll take billions of dollars, political will and community buy-in, ingredients that aren’t always easy to come by.

Head just a few minutes east from downtown Houston’s fancy restaurants and cocktail bars and you’ll find yourself in a gritty, heavily-industrial side of the city filled with refineries and smokestacks. From there, you can watch tugboats push barges up and down the Houston Ship Channel, the region’s economic beating heart. The industry hums along, but it’s all at risk of disastrous flooding, given the right hurricane in the right spot.

Rice University’s Severe Storm Prediction, Education and Evacuation from Disasters Center has been looking at how to build something to protect the coast for years. Hurricane Ike, which hit the region in 2008 could have been a lot worse, said Larry Dunbar, project manager at the SSPEED Center.

“It’s kind of like, we’ve dodged the bullet,” Dunbar said. “Had Ike made landfall where it was projected to make landfall, we would’ve seen three to five feet more water in the ship channel,” he said. “That would’ve made some people kind of wake up.”

A big enough storm could shut down Houston’s industry, causing widespread fuel supply disruptions and environmental contamination. That’s in part why Texas and the U.S. Army Corps of Engineers want to build more than 50 miles of levees and floodwalls on the coast, along with huge storm surge gates.

“We are now seemingly getting bigger hurricanes than we’ve had before, more frequently,” he said. “We know we’re getting 30, 40, 50 plus inches of rain.”

His team is proposing even further protections. The Army Corps’ plan is its early stages, and it’s likely there will be plenty of debate to come.

“We hope it’s something that’s good for everyone, and not just the refineries and the plants,” said Jeff Antonelli, owner of the “Shrimp ‘N Stuff” restaurant in Galveston, south of Houston, where the barriers would be built.

Antonelli worries that the project would impact tourism and life in general. Still, after Ike, he thought hard about his future and decided the coast needs some kind of defense.

“Is this a place where my kids and their grandkids are going to … is it still going to be here if we get hit by these?” he recalled asking himself. “Because whether you believe in climate change or not, I mean, this is a fact that I’ve lived.”

Bayou City Waterkeeper is one of a few local environmental groups that agree the region needs protecting, but worry the Army Corps is trying to build its way out of the problem.

“Concrete infrastructure is not this sure-fire way that we’re going to have protection,” said Jordan Macha, the group’s executive director. “We have not really seen anything that is a true comparison to what they’re proposing.”

The Netherlands has built huge storm surge gates before, but the Texas project would likely be bigger. Macha’s group wants more details on how the gates in the water would affect things like oysters, shrimp and fish.

“Particularly in an area that relies so heavily on these ecosystem resources for its livelihood, we shouldn’t be flippant to say ‘yes, we know that we need protection and we’ll take whatever we can get,’” Macha said.

The plan does include ecosystem restoration projects like improving beaches and sand dunes to make the coast more naturally storm-resistant. And the Army Corps says there’s room for modifying the plan: everything from the scale and the design of the barriers to the way environmental impacts are managed could still change.

The project is estimated to cost around $32 billion. One big challenge? Convincing Congress to approve that.