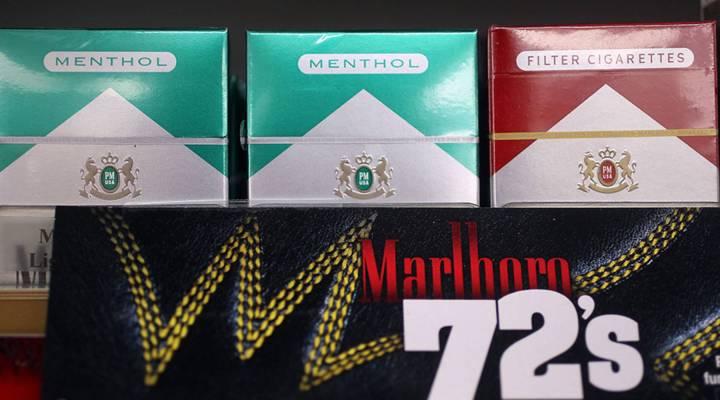 COPY
Menthol cigarettes are seen for sale on a shelf at a Quick Stop store on March 30, 2010 in Miami, Florida. Joe Raedle/Getty Images

Menthol cigarettes are seen for sale on a shelf at a Quick Stop store on March 30, 2010 in Miami, Florida. Joe Raedle/Getty Images
Listen Now

The FDA has proposed restricting flavored e-cigarettes and banning menthol cigarettes, which are disproportionately smoked by African-Americans.

After World War II,  cigarette companies were trying to figure out how to market to a still segregated but new black middle class.  They found 5 percent of blacks preferred menthol, as compared to 3 percent of whites, said Phillip Gardiner, who studies tobacco use for the University of California.

“They said, well, we could use that little difference. They had different smokes for different folks,” he said.

That continued through the ’60s and ’70s. Kool and Newport advertised in Essence and Ebony, and Kool sponsored black music festivals. Menthol cigarettes were cheaper in black communities. By the ’90s, even Biggie Smalls was rapping about them.

Today, nearly nine out of 10 black smokers prefer menthol cigarettes. Andrea Villanti is a professor of psychology at the University of Vermont. She said a menthol cigarette ban will affect black communities.

“We would expect that they would be potentially less exposed to tobacco marketing,” she said.

And with blacks disproportionately affected by smoking-related diseases, that may be a good thing.