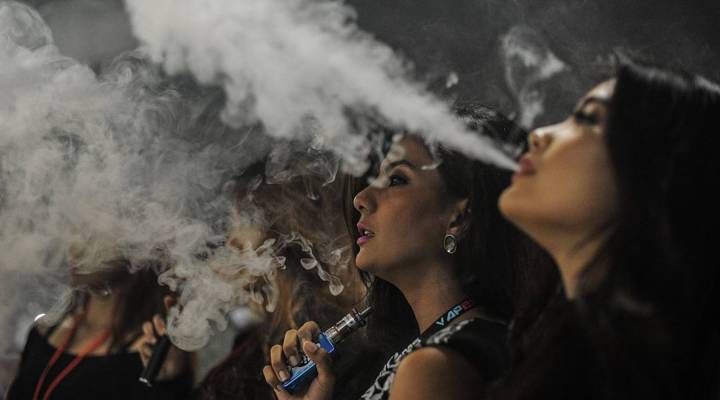 The FDA's new laws will affect a variety of tobacco products, including those involved in vaping. MOHD RASFAN/AFP/Getty Images

The FDA's new laws will affect a variety of tobacco products, including those involved in vaping. MOHD RASFAN/AFP/Getty Images

The Federal Drug Administration released new e-cigarette regulations Thursday that may have a dire impact on the fledgling industry.

The making and selling of e-cigarette products is an estimated $3.5 billion business. The new rules, spelled out in a499-page document,will take effect in 90 days. As the tobacco cigarette sales have declined, the popularity of inhaling e-cigarettes, also known as vaping, has risen in recent years, but the businesses behind the recreation went largely unregulated.

Here are some takeaways from the regulations:

• In an attempt to curb teen use, the FDA is banning the sale of e-cigarettes to people under the age of 18, and the distribution of free samples, Reuters reported. The agency is not limiting flavors, which range from bacon to bubble gum, that are popular among youth, but may in the future. Government data released in April indicated that 3 million middle and high school students used e-cigarettes in 2015, up from 2.46 million the previous year.

• These new rules will apply to liquid nicotine products and the devices used to inhale the substance, as well as cigars and hookahs.

• The regulations could mean a shakeup for the industry’s smallest businesses. The FDA’s new approval process could cost businesses between $2 million to $10 million per item, which may lead to the demise of smaller vape shops, manufacturers and producers, reported the The Wall Street Journal.

• The FDA will have a staggered review period for products introduced after Feb. 15, 2007, of between 12 and 24 months, according to Reuters, with a proposed two-year grace period.

To hear more about how the new rules will affect small vape businesses, click on the audio player below.