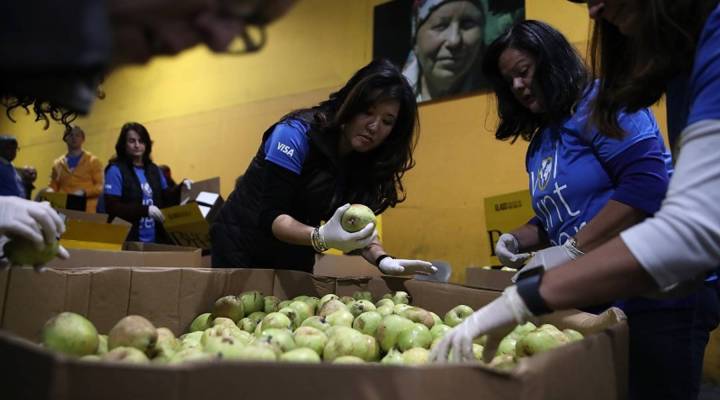 “We keep everything here about 10 degrees above zero so it’s nice and chilly in here,” said, Dave Richins, president and CEO the food bank, after opening the freezer door.

Richins’ walk-in freezer and coolers have a lot of space right now. But not for long. Most years, the center distributes between 20 million and 21 million pounds of food. This year, it’s going to have even more.

Here’s why: After the Trump administration slapped tariffs on Chinese goods, the Chinese retaliated on American food. Food sales to China slowed, leaving farmers with a bunch of excess food. But in August, the White House stepped in and announced a $12 billion aid package to mitigate the farmers’ losses.

About a tenth of that money, up to $1.2 billion, will go to buying crops that probably would have been sold to China. All that food, however, needs a home. Those apples, cranberries, lentils and other goods are getting redirected to food banks and other nutrition programs around the country. These are welcome, but sudden, donations.

UFB will receive about 850,000 pounds of food from the tariff aid program, though the year was already shaping up to be a big one. A separate annual harvest program from the U.S. Department of Agriculture is sending 3 million more pounds of food to UFB than is typical due to a bountiful harvest. With those two programs combined, UFB will surpass its usual intake by nearly 4 million pounds of food.

Richins is the first to say this is a great thing for the 40 million Americans dealing with food insecurity. But that doesn’t mean it’ll be easy. The extra food will require additional money for transportation, fuel and storage. United Food Bank is seeking $350,000 in new donations to help with increased logistics costs.

“Some of the food banks are worried that they might not be able to accept all of the food that might come their way because they can’t afford to pay additional truck drivers, lease the trucks,” said Carrie Calvert, managing director of government relations at Feeding America.

The USDA said there is some department money available, but in general called the unexpected food distribution an opportunity for “public-private partnerships.”

“We don’t anticipate asking Congress for any funds to be able to accomplish our goals,” said Greg Ibach, undersecretary for marketing and regulatory programs at the USDA.

Ibach is also expecting the Trump administration’s negotiations with China will be successful, ending the trade war before next fall.

“We’re hoping that by this time next year, when 2019 crop is being harvested, that we won’t need to talk about any additional assistance program,” he said.

Even if that bears out, Feeding America’s Calvert said this year’s spike in supplies has food banks wondering how they can keep inventories higher in the future.

“We will need to actively look for ways to replace the food so that we can continue serving families in need,” she said.

For now, groups like Richins’ United Food Bank are focused on the short term.

“We’re really worried about it,” Richins said with an anxious laugh. But despite the mountain of work ahead for him and his employees, he was optimistic.

“The first month or two might be a little rocky, but I think we’re up to the challenge,” he said.

If everything goes as planned, it could mean about 3 million additional meals for this region alone.