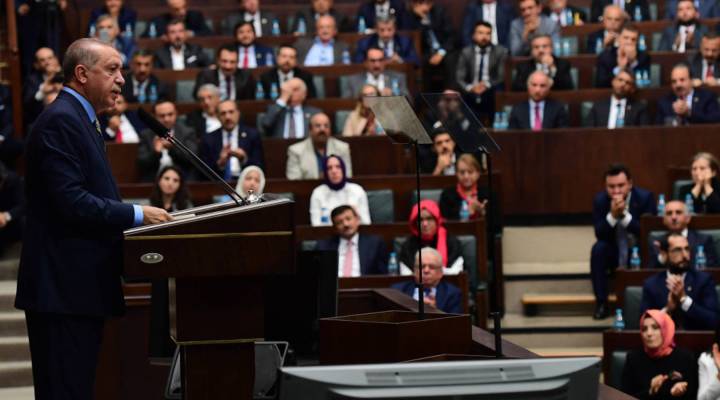 COPY
ANKARA, TURKEY - OCTOBER 23: President Recep Tayyip Erdogan speaks about the murder of Saudi journalist Jamal Khashoggi during his weekly parliamentary address on October 23, 2018 in Ankara, Turkey. Erdogan said Khashoggi was the victim of a 'brutal' and 'planned' murder and called for the extradition of 18 suspects to Turkey to face justice. Khashoggi, a U.S. resident and critic of the Saudi regime, went missing after entering the Saudi Arabian consulate in Istanbul on October 2. Getty Images

ANKARA, TURKEY - OCTOBER 23: President Recep Tayyip Erdogan speaks about the murder of Saudi journalist Jamal Khashoggi during his weekly parliamentary address on October 23, 2018 in Ankara, Turkey. Erdogan said Khashoggi was the victim of a 'brutal' and 'planned' murder and called for the extradition of 18 suspects to Turkey to face justice. Khashoggi, a U.S. resident and critic of the Saudi regime, went missing after entering the Saudi Arabian consulate in Istanbul on October 2. Getty Images
Listen Now

In remarks to his country’s parliament, President Erdoğan called for answers to a number of lingering questions surrounding Khashoggi’s disappearance three weeks ago, including who was involved and what happened to the journalist’s body.

“Why was it that so many contradictory statements were made about the alleged murder? We want answers to that. The body of Jamal Khashoggi is still missing. Why is that? We want to know the answer to that question. It is not going to satisfy us or the international community that this was just a rogue operation of a few,” Erdoğan said.

Erdoğan called for an “entirely independent investigation” and said trials of any suspects related to Khashoggi’s disappearance should be conducted in Istanbul.

Saudi Arabia has said Khashoggi died in a brawl at its consulate in the capitol city, and blamed rogue agents. But the case has been met with international furor.

Still, more than 100 participants are attending. French oil firm Total’s CEO Patrick Pouyanné is on the speaker list. The CEO of defense and cybersecurity manufacturer Raytheon, Thomas Kennedy, is also a listed speaker.

Meanwhile, many firms, including JPMorgan and HSBC, sent less senior executives. Mnuchin met Monday with Crown Prince Mohammed Bin Salman – who hasn’t directly addressed the killing of Khashoggi – at a meeting separate to the investment conference.

Based on the conference’s attendance, business leaders are echoing what President Donald Trump has said in recent days: while they condemn the killing and the circumstances surrounding it, they are taking the “long view” as Saudi Arabia, the biggest regional economy, opens up.

“Unfortunately, the killing is an event that is quite appalling but at the same time, emerging markets do offer opportunities. Look at China. These are autocratic regimes, but still business goes on. Pragmatism when it comes to money and business, tends to prevail,” said John Sfakianakis, chief economist and strategist at Albilad Capital — an investment firm based in Riyadh.

Sfakianakis is attending the event, organized by the Saudi Sovereign Wealth Fund, which has assets of $230 billion. U.S. goods and services traded with Saudi Arabia totaled an estimated $45.6 billion in 2017, according to the Office of the U.S. Trade Representative.

Senior Saudi leaders attending the conference have admitted Khashoggi’s killing has had an impact.

“We are going through a crisis of sorts resulting from the very regrettable and abhorrent incident that took place in Turkey,” Khalid Al-Falih, Saudi Minister of Energy, Industry and Mineral Resources told an audience. “Nobody in the Kingdom can justify or explain it.”

He said the king has promised justice and a return for those who continue to invest in the country.

Saudi Arabia remains one of the world’s largest arms importers. Its main suppliers are the U.S., U.K., Canada and Germany and sales rose sharply in 2016 as the Saudi war in Yemen, which has led to famine and death, intensified.

Germany said Monday it would halt arms sales to Riyadh until the Khashoggi case is resolved and called on other countries to do the same. However, President Trump has said he’s not keen on canceling defense contracts with the kingdom.

According to Sfakianakis, the U.S. will also want to keep one of its key Middle Eastern allies strong and on its side, especially ahead of the reinstatement of sanctions against Iran next month.

Click on the audio button above to hear more of the interview with John Sfakianakis. 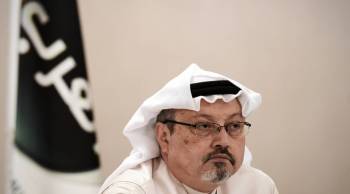