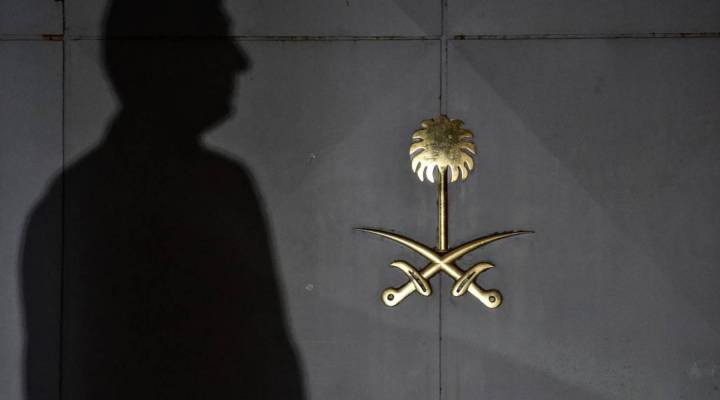 COPY
Security members of the consulate wait in front of the gate door of the Saudi Arabian consulate on October 17, 2018 in Istanbul. OZAN KOSE/AFP/Getty Images

Security members of the consulate wait in front of the gate door of the Saudi Arabian consulate on October 17, 2018 in Istanbul. OZAN KOSE/AFP/Getty Images
Listen Now

More than two dozen top government and business executives would have packed for a trip to Saudi Arabia this week. They were going to attend a major economic conference, the Future Investment Initiative, often referred to as “Davos in the Desert.” But the disappearance and death of Saudi dissident Jamal Khashoggi has caused those people to cancel and has investors rethinking their ties to the authoritarian state.

“I’m confident to say that it’s really devastating to the Saudis financially. I don’t know what it’s going to take to fix things,” said Bessma Momani, a professor at the University of Waterloo in Canada who studies economics and the Middle East.

The conference, held at the Riyadh Ritz-Carlton and designed to appeal to Western governments, is a key part of the Saudi government’s plan to promote foreign investment in the country as it seeks diversify its economy beyond oil sales.

But while Khashoggi’s death has generated an international outcry, previous authoritarian acts had already shaken investors, said Garbis Iradian, the chief economist for the Middle East and northern Africa at the Institute of International Finance.

“You don’t see significant private investment, even local investment, in the economy. There were signs even before the recent incident,” Iradian said.

Right after the first Davos in the Desert, the crown prince imprisoned dozens of local businessmen in the same hotel where the conference was held, accusing them of corruption. Iradian said foreign direct investment plummeted in 2017, equaling 0.5 percent of Saudi gross domestic product, well below the government’s 2030 target of 5.7 percent. It rose moderately in the first two quarters of this year.

“The business environment remains one of the worst in the region,” Iradian said. “They need deep structural reforms.”