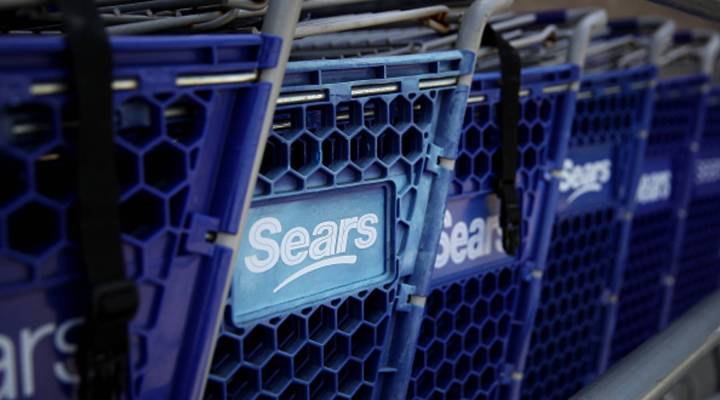 Sears filed for Chapter 11 bankruptcy Monday morning in a final attempt to save the 125-year-old department store from a complete shut down. Sears Holdings said it plans to close 142 of its stores by the end of 2018, liquidating the assets at all of those locations.

The company has struggled financially for decades as new competition like Walmart and Target came onto the scene, selling similar items at cheaper prices. However, Sears has been an American staple since it opened its doors in 1892. Over the years it’s sold just about everything, from household appliances to children’s clothes to pets such as hamsters and dogs. Sears played an instrumental role in many Americans’ lives, so we asked listeners to share their Sears stories.

Some people wrote in telling us they purchased family pets at Sears. That’s where Ann Shaw bought her beloved hamster, Minerva.

“The store sold those large golden hamsters — miniature ones didn’t exist at the time,” she said. “I have no idea where the store obtained the hamsters they sold, but they really took care of them — clean cages, plenty of food and healthy, sociable animals,” Shaw said.

Sears is also where Suzanne Lederer’s dog came from.

Suzanne Lederer at 9 years old in 1961, holding her new dog Blackberry. He was 9 weeks old and fresh out of the Sears Roebuck crate.

“When I reached the age of nine, I wanted a dog for my birthday, so my mother got out the Sears book and ordered a Cocker Spaniel puppy. Blackberry lived happily with us for 16 years.”

Many people had fond memories of the Sears catalogues. Mark Jahraus told us a story about winter coats his mom ordered for him and his two brothers.

Marketplace listener Mark Jahraus with his brothers in the 1960s. They are all wearing matching winter coats from Sears.

“She had ordered winter coats for myself, and my two older brothers in 1960 from the Sears catalogue. As was her habit, she ordered three of the same style, and so, in old family photos, we three boys are very often dressed alike. As I was the youngest of the three, I always had hand-me-down clothes to wear and thus wore the same style for three or more consecutive years. My mother told me that after wearing these coats for a year, she washed them and the red color faded into the white. She wrote a letter to Sears about this, and without any further prompting, Sears sent her three new coats of the same style, but each in a larger size to account for our growth during the year. Of course, this extended the length of time that I was to wear these coats. What thoughtful Sears employees these were.”

A photo of a 1966 Sears Christmas Catalog.

“Two words: Christmas Catalogue. As a kid I remember every time one came to my grandma’s. I would sit for hours and look through the toy section and circle what I wanted. Especially when ‘Star Wars’ came out.”

Their Christmas toy catalogues that came to the house as thick as phone books.

Material possessions and family pets weren’t the only things to be found at Sears. Some even found love.

Arlene Tuttle and her husband Ronald, who started dating in 1960 after a trip to Sears to purchase a flashlight.

Arlene Tuttle wrote: “I have a huge soft spot in my heart for Sears. In 1960 I was working as a research technician at the University of Manitoba Medical School. One of the graduate students that I worked with and I were working on a long experiment and had about an hour or more to wait for the next step. He needed a new flashlight, and asked me if I wanted to come to Sears with him to get one. We drove to the Sears in Polo Park in Winnipeg — the first time we had ever gone anywhere just the two of us. We found the perfect flashlight, had coffee and returned to work. We subsequently started dating, and went on to marry and spend a beautiful life together. The trip to Sears was the beginning of a beautiful love story.”

Julia Watson’s parents were both Sears employees when they met.

“My parents met in the late 1930s when both of them worked at Sears in Detroit. My mother was a small-town girl from the Thumb, my father a good-looking Irishman from New Jersey whom people called “Murph” after Michigan’s governor Frank Murphy. She worked in the jewelry department, he in undergarments, yard goods, and various home items.”

My favorite memory is.. Me. My parents met at Sears credit in the early 60s in Vermont, she was a teller, he was stationed in the air force nearby and came in to apply for a credit card, they eloped a month or so later (though i didn’t come along until 1966 ?).

My parents met at Sears, where my mother worked in men’s furnishings during her summers off from teaching. Years later, my dad took me to Sears to put together a toolkit when I bought my first house.

And, after Sears played matchmaker, it was even able to offer homes to families. Peggy Lauber lived in one in New York.

“Our house in Greenport, NY, located on the East End of Long Island was built using architectural plans from Sears Roebuck, circa 1896. This is also true of many of the homes in our neighborhood. The plans were purchased from Sears during this period, and the builders then could make changes as they saw fit. For example, our house, which is considered a Victorian Farmhouse style, has a wraparound porch, whereas the house next door, also built from Sears Roebuck plans, does not have a wraparound porch but has a bay window. As you walk the neighborhood you can easily pick out the homes that were built using these plans.”

Peggy Lauber’s home, which was built using architectural plans from Sears Roebuck in the 1890s.

For Jeff Long, a Sears home had a big impact on how he viewed architecture.

“My maternal grandparents lived in a 1915 Sears Craftsman house in the Midwest. The structural design and decorative woodwork of that house heavily influenced me to develop a strong interest in architecture, construction, woodworking and real estate.”

The ultimate fate of Sears is still uncertain but it’s clear that it will live on in the memories of many people.