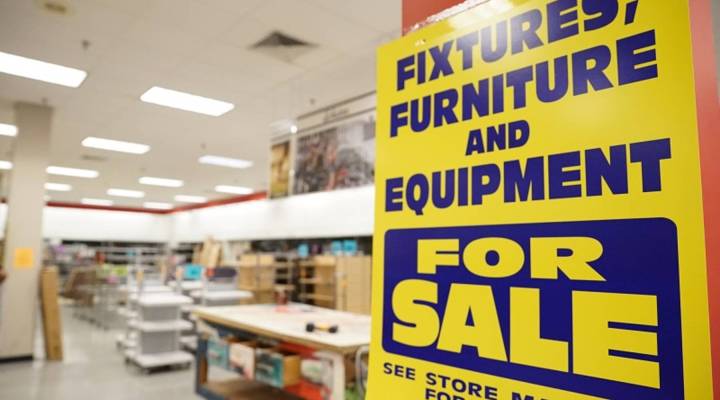 COPY
The Sears at University Mall in Tampa, Florida, where everything must go. Renata Sago/Marketplace

The Sears at University Mall in Tampa, Florida, where everything must go. Renata Sago/Marketplace
Listen Now

As you might have heard, the iconic department store chain Sears filed for Chapter 11 bankruptcy and is planning to close 142 of its nearly 900 Sears and Kmart stores across the country. In preparation, many are holding giant closeout sales. It’s sad news for the 125-year-old retailer. But it’s good news for people in the business of closing a business.

The process is playing out at the Sears store at University Mall in Tampa, Florida, which these days looks like sort of like a  garage sale with brand new merchandise. Items are stacked on shelves in no particular order. Others are scattered across the sales floor with brightly colored handwritten price tags. Signs everywhere command “everything must go.”

“I came for a toaster I saw earlier, but hey, it’s gone,” said Cidny Mondesir, who stopped in as soon as he heard about the the store’s imminent closure.

After a slow stroll through nearly every section of the store, he found something else he wanted: a nice shirt.

Before discounted merchandise ends up in the hands of Mondesir and other shoppers, plans for store liquidations must go through a careful process, said Anthony Chukumba, managing director of Loop Capital Markets. In the case of a company like Sears going through Chapter 11 restructuring, they must be approved by three parties: The company’s creditors, a federal bankruptcy court and a third party that’s appointed to squeeze as much money from bankrupt company’s assets as possible. That company for Sears is Abacus Advisors Group. It wouldn’t comment for this story.

“They have to, along with the bondholders, figure out what combination of keeping stores open, liquidating stores, liquidating assets will maximize value for the debt holders at this point,” Chukumba said.

It’s a legal process that can take months.

Sears is about $5 billion in debt. To offset that, Chukumba said, merchandise sales are just the beginning. The brand itself could be sold off as well as its real estate.

Sometimes that means bringing in merchandise liquidators like David Solomon, who runs the company Closeouts World in Fort Lauderdale. He said he has worked with Sears stores in the past but isn’t right now.

“I’ve seen chain stores go out of business where the owners, the CEOs, have just been sitting and crying while their stores were being dismantled, piece by piece,” he said from his warehouse. At any given moment, it is filled with pallets of all kinds of things from designer jeans and shoes to plastic swords.

Solomon is the middle man between one store that’s getting rid of merchandise and another in need of it. He buys in bulk at a discount and tries to sell items for more. He says he can make anywhere from 1.25-15 percent in profit depending on the product and volume. His customers include other retailers, flea markets, even stores abroad.

The Tampa Sears store in liquidation has $6 million in merchandise according to a store manager who was not authorized to talk. Sears declined to be interviewed, but in a statement said it would continue to honor warranties for products sold at its liquidation sales.