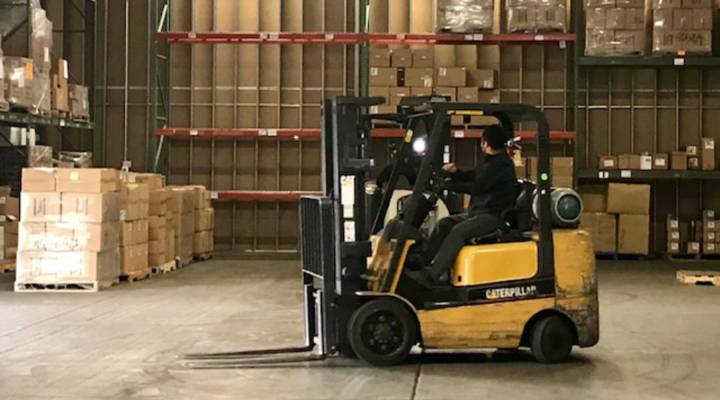 A worker about to move stock at the Medsource Labs warehouse in Chaska, Minnesota. Laura McCallum/Minnesota Public Radio
Listen Now

The tit-for-tat tariff war between China and the United States has been bad news for lots of importers in this country. In the last few months, the Trump administration has published three lists of products made in China that now carry 10 percent tariffs, and that could go up to 25 percent on January 1. Companies are struggling with whether to pass that cost onto customers, swallow it or do something else. And there are options out there if you know whom to ask. Trade consultants have seen their business rise lately along with importers’ woes.

Robert Stein is one of them. He’s vice president of Mohawk Global Trade Advisors in Syracuse, New York.

“We’ve seen a flurry of phone calls, emails, people reaching out to us really in many cases in panic trying to figure out what they can do to mitigate the effects of these new tariffs,” he said.

He said that interest has translated into 20 percent more business, and he’s considering adding more staff.

He’s not the only one seeing an uptick.

Amy Magnus is with customs brokerage A.N. Deringer, headquartered in Vermont. Her company’s consulting group has been inundated with questions since the first tariffs on steel and aluminum tariffs were announced this spring. She said companies from famous names to startups are scrambling to find answers to questions about their goods, such as whether the item can be “engineered differently and classified differently” so as to avoid tariffs.

She said clients also ask, “Is it possible to change certain parts of the manufacturing process that we could change the country of origin of the good?” Meaning it would no longer qualify as “made in China.”  She said there’s no simple answer to some of these questions, but that complexity is boosting Deringer’s consulting business.

MedSource Labs in Minnesota is one of Deringer’s clients. The company makes medical devices. Todd Fagley, the CEO, said when the Trump administration began announcing rounds of China tariffs, he and his colleagues got on the phone with their consultants, who warned them, “This is not a drill,” and told them they needed to prepare to possibly change their business practices.

MedSource Labs CEO Todd Fagley with one of the company’s tourniquets.

Almost half of his company’s manufacturing takes place in China. About 30 of its products have been slapped with tariffs. Many end up in the warehouse at MedSource Labs headquarters near Minneapolis.

Looking around the warehouse, Fagley pointed out one of his bestsellers that’s now subject to a tariff. It’s a tourniquet that goes around a patient’s arm when they’re having blood drawn or an IV inserted.

The question is: What to do now? He said he doesn’t want to pass that cost on to the distributor and ultimately to the patient. One thing Deringer advised, he said, was “figuring out how to we get more efficient manufacturing.”

If the company can save money on the manufacturing process itself, the tariffs won’t affect it so badly. He’s also considering moving some manufacturing to other countries.

Fagley wouldn’t say how much the tariffs could cost the company because he said he doesn’t know what’s going to come next.

Stein of Mohawk Global Trade Advisors said the uncertainty is the worst part of this. He said clients tell him all the time that the situation is hurting them “because they don’t know how to plan. And business is all about planning,” he said. “How much can I allocate for raw materials? What kinds of contracts can I sign?”

Companies want to know what their expenses will be.

He said with all his contacts in the industry, he used to be able to predict where trade policy might be heading. Now, he said, when a presidential tweet might change everything, he honestly has no idea.