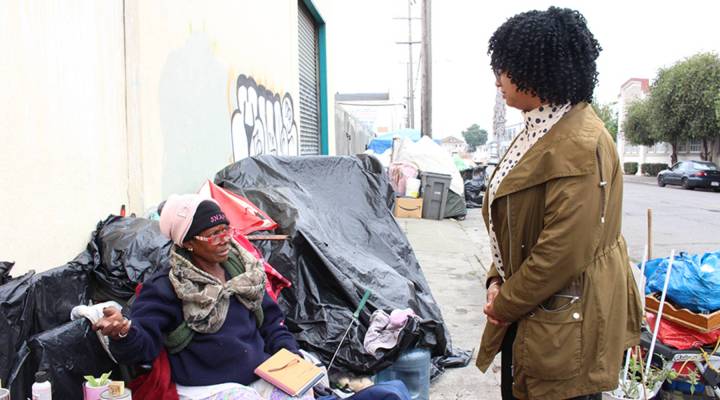 COPY
Homeless advocate Candice Elder checks in with Dorothy Smith at an encampment in Oakland in August. Smith, who raised her children in the city, said her disability benefits are not enough to afford housing. Farida Jhabvala Romero/KQED

Homeless advocate Candice Elder checks in with Dorothy Smith at an encampment in Oakland in August. Smith, who raised her children in the city, said her disability benefits are not enough to afford housing. Farida Jhabvala Romero/KQED
Listen Now

Like many Oakland residents, Candice Elder, 34, is alarmed at the rapidly increasing number of people pitching tents on sidewalks and under freeways in the city.

Unlike most residents, Elder has worked at dozens of homeless encampments as part of a team providing “rapid response services on call 24-7,” including food, crisis management and medical assistance.

“The rate of homelessness has dramatically increased in the last few years. And you can correlate that to the affordability crisis,” said Elder, founder and director of The East Oakland Collective nonprofit, as she visited a 65-year-old woman sitting on a corner, surrounded by piles of belongings.

It could take years to build more affordable housing, but Elder sees a faster way to relieve homelessness in the city.

“There’s a lot of vacant properties that haven’t been used for years,” Elder said as she pointed to a fenced empty parcel next to the encampment she visited on a recent morning. “As a city and as a community, we need to take a look at these vacant public and private lands and see how we can use them.”

Voters will decide on taxing owners of vacant properties

Oakland voters could approve the state’s first tax on privately owned vacant properties in November. The city estimates the tax could raise as much as $10 million annually, with the money helping pay for homeless services, reducing blight, stemming illegal dumping and assisting the construction of affordable housing.

Owners of properties in use fewer than 50 days per year would be taxed as much as $6,000 per parcel annually if two-thirds of voters approve the measure.

Two weeks after the Oakland City Council voted 6-2 to place the tax on the ballot, officials in the neighboring city of Richmond greenlighted a similar proposal.

Owners of vacant properties in Oakland would pay the same amount of additional tax, regardless of the size or worth of their property. Under California law, cities cannot legally tie a parcel tax to market values.

The belongings of people living on a sidewalk in East Oakland are strewn next to an empty lot. “A lot of properties were vacant when I was growing up, and they are still vacant now,” Elder said.

Critics worry the tax could disproportionately hurt small landowners, pushing some to sell their property to investors that can pay Oakland’s skyrocketing market values. But proponents praise the tax as a creative incentive to transform thousands of vacant lots and buildings into homes or businesses and at the same time decrease blight.

“We are looking not only to get rid of the trash, the weeds, the types of problems you might see, but also to encourage people to do something that would be of benefit to the community,” said Councilwoman Rebecca Kaplan, who authored the measure.

In just two years, the city’s homeless population increased by 25 percent to nearly 2,800 people, according to the most recent survey of Alameda County. But some homeless advocates say that’s severely undercounted because many people who are couch surfing or sleeping in cars were not included.

The father of three said an empty parcel next to his home attracts trash and drug use. A gunfight in the lot once sent a stray bullet through a bedroom in his house, he said.

But Acosta, who also owns a lot labeled as vacant by the county assessor’s office, doubted the tax would encourage him to build the duplex he previously planned for his land. He was dismayed after learning city permits would cost about $35,000 and take a year to process.

“It doesn’t make sense to just try to penalize people with taxes for not having something built on their lot when they are making it difficult for everybody to build something,” said Acosta, who is growing potatoes, bell peppers and other vegetables on the plot instead.

He might not be subject to the tax if the city defines gardening as an active use of property. But Acosta said that if he is faced with a new $6,000 tax assessment each year, he would likely sell.

“It’d be too much money to pay,” he said. “The tax will pressure people into selling or building, but most likely selling for those who don’t have time, money and energy to deal with the tax.”

Building new housing in Oakland is an expensive proposition. While construction costs can vary significantly based on the size and amenities of a project, the city estimates 1,000 square feet of new construction costs about $200,000.

Permitting fees for a three-bedroom home can total more than $25,000, according to Oakland’s planning and building department.

Councilmember Rebecca Kaplan, left, speaks with property owner Francisco Acosta in front of a vacant lot in West Oakland in August. Kaplan wrote a proposed tax on vacant properties to help ease homelessness in the city.

Nonprofits and low-income owners would be exempt from the tax, as well as others who can prove financial hardship.

Kaplan suspects the majority of vacant properties are being held by owners as a speculative investment in Oakland’s hot real estate market.

“People who may not have the connection and the motivation to do something with them, and especially a lot of big corporate speculators,” Kaplan said. “And so the vacant property tax will help us keep track of who owns them, what they’re doing with them.”

About 4,400 bare lots could be subject to the tax, plus an unknown number of vacant residential, commercial and industrial buildings, according to a report by Katano Kasaine, Oakland’s finance director.

Critics decried that lack of clarity, arguing it’s unfair to ask voters to decide on the tax.

“It’d be great to have a list first before you went about taxing people on it,” said Kiran Shenoy, government affairs director for the Oakland Berkeley Association of Realtors. “We don’t know whether or not this is going to end up disenfranchising a lot of small Oakland property owners.”

He stressed that although the measure has several exemptions, it will be up to the landowners to prove they qualify.

A recent study by the Terner Center for Housing Innovation at University of California, Berkeley, found most vacant parcels in the city are small, fit for a single-family house or duplex.

Author Hayley Raetz dug through county data that suggests 57 percent of vacant land owners in the city only hold one parcel. But she cautions that percentage is likely overblown in part because owners can create individual LLCs or limited liability companies for each property they buy.

“That’s where it gets tricky, unfortunately. Sometimes you see lots that have owners with different first names and the same last name. But it’s hard to tell if that’s a family or if it’s just a common last name,” Raetz said.

Implementing the tax measure will be key

Land-use experts and others following the debate said that while they support the concept of the tax, much of the proposal’s effectiveness depends on how the city would put it into action.

“We do have some concerns about how it will be implemented, starting with the definition of what constitutes vacancy,” said Sarah Karlinsky, senior policy adviser at SPUR, a think tank focused on urban planning in the San Francisco Bay Area. The organization sent a letter to city leaders recommending they clarify that definition.

A parcel that hosts a farmers market once a week would be considered active, said Councilwoman Kaplan. But Karlinsky said enforcement even in that scenario could prove difficult.

“Monitoring that from the public sector side is really tough,” she said. “Like, are they going to send people out every week to make sure Joe had his farmers market?”

Proponents for the tax point to other cities that have tried taxing empty homes and blighted properties, such as Vancouver, British Columbia and Washington, D.C., as examples of efforts to make land more productive while funding city services.

“I think this vacant property tax is brilliant,” said Paula Hawthorn, adding that she is tired of walking by abandoned-looking storefronts near her Oakland home. “It’s a good way to stop people from holding on to their property for speculation.”

For James Vann, a retired architect who pushed for the tax, the exemptions in Oakland’s measure and the city’s promise to work out the details are enough to move forward.

The tax would be in place no sooner than 2020, giving the city time to ramp up the effort and create a registry of properties.

Vann believes the measure, which would expire in 20 years, represents an opportunity to fund homeless services the city is struggling to afford.

“There’s just no money there in the budget,” said Vann, a member of the Homeless Advocacy Working Group. “The homelessness problem is one that we are facing now, that is critical. We can’t wait.”

The California Dream series is a statewide media collaboration of CALmatters, KPBS, KPCC, KQED and Capital Public Radio with support from the Corporation for Public Broadcasting and the James Irvine Foundation.