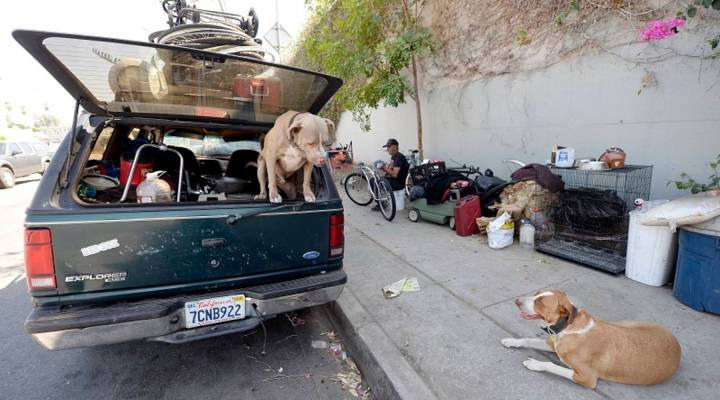 COPY
Nearly 15,000 cars are used as homes in Los Angeles County, according to the Los Angeles Homeless Services Authority. Above, a man who lives in his car repairs a bicycle in the city of LA. Photo by Kevork Djansezian/Getty Images

Nearly 15,000 cars are used as homes in Los Angeles County, according to the Los Angeles Homeless Services Authority. Above, a man who lives in his car repairs a bicycle in the city of LA. Photo by Kevork Djansezian/Getty Images
Listen Now

Sean Kayode says he watched his whole world roll away from him at 3 in the morning.

Kayode had been living in his car in San Francisco about two years. During the early morning of March 5, traffic police towed and impounded his red 2003 Mercedes-Benz for having too many overdue parking tickets.

“I wake up at 3 o’clock in the morning and there was a guy behind me. And I’m like, ‘What are you doing behind my car?’ ” Kayode said, now standing in the lobby of the Next Door homeless shelter in downtown San Francisco. “He says, ‘I’m just waiting for the tow truck to come get you.’ ”

For Kayode, who now lives at Next Door, his car wasn’t just a place to sleep, it was how he earned a living, he said, delivering food through Uber Eats. He shakes his head in disbelief at where he was and where he is now.

“I am a homeless guy that worked my way out of homelessness,” Kayode said. “Bought my own car. Now you’ve taken my car, taken my job and now giving me food stamps. It doesn’t make sense.”

An estimated half million cars a year in California are impounded, unclaimed and sold, according to Jude Pond of the Lawyers’ Committee for Civil Rights in San Francisco. He said many of those cars belonged to poor people living in them.

Pond helped file a lawsuit on Kayode’s behalf to challenge the California law that allows cities to tow a car away if that car has five or more overdue parking tickets. Many cities follow that policy, and Pond said it’s unconstitutional in several ways.

The government should not be allowed to take someone’s property without any notice and without a warrant, he said. That’s doubly true, he said, because these vehicles weren’t used in a crime, but were towed simply for financial reasons — just to collect fines.

Cities do not issue warnings, outside of the fine print on a parking ticket, that they’re coming to impound a vehicle. Parking officers just show up and take it away. And in the case of the homeless who live in their cars, city officials are taking their temporary home from them, which raises the stakes above the taking of a vehicle, Pond said.

“We’re hoping that this case sets the precedent that the city should not take people’s only asset, in this case their car, for the purpose of satisfying a debt, based on just outstanding parking tickets,” Pond said.

In San Francisco, officers towing a car with a homeless occupant will contact the police department and social services to help that person get services, according to Paul Rose, spokesman for the San Francisco Municipal Transportation Agency, who responded by email.

“There will be times when the [Homeless Outreach Team] will not be available to respond. If there is no urgency regarding the towing of the vehicle we will make an effort to delay the tow to allow services to respond,” Rose said. “We cannot completely avoid the removal of the vehicle as this would create an unintended exemption for vehicles that are in violation of city or state law.”

Tens of thousands of Californians are living in their cars; in Los Angeles County alone, nearly 15,000 cars are used as homes, according to the Los Angeles Homeless Services Authority. Because losing those cars to impoundment can mean the loss of work and home, it can be a tipping point into a life on the streets.

For many people, having their car towed for overdue parking tickets is a major annoyance and life disruption. But for homeless people, it’s a permanent loss, because most of them can’t afford to recover their cars.

The costs escalate quickly. Offenders must reimburse the tow charge, roughly $500. They also need to pay off their original tickets and the accrued fines on those tickets, which can be $1,000 or more. On top of all of that, it usually costs $71 for every day the car is stored at the tow yard.

Sean Kayode, standing outside the Next Door homeless shelter in San Francisco, is suing the city for taking his car, which he was using both for delivery work and for a bed at night. It was towed because Kayode had too many overdue parking tickets.

Ostensibly, the city is towing the car to collect a debt, but in many cases where cars are unclaimed and eventually sold, the city doesn’t make much money on the sale, if anything. That’s because the tow yard has first dibs on any cash collected.

For the cities, though, it’s not about the money, according to UCLA political expert Zev Yaroslavsky.

“It’s the credibility of the restrictions,” Yaroslavsky said. “If the restrictions were not enforced, then no one would comply with them. The reason you and I rush out to the parking meter when it’s about to expire to put another quarter in there is because we don’t want to pay $80 for the privilege of having overstayed our welcome by a minute.”

Yaroslavsky spent four decades in local government in Los Angeles, most of it on the county Board of Supervisors. He said he understands why cities hold on to their impound power with both hands.

“As a local elected official, I was never concerned about the revenue stream we were getting out of the parking,” Yaroslavsky said. “It was motivated by getting turnover in the limited parking spaces we had available at curbside.”

At the same time, he said, there has to be a middle ground when towing cars from the homeless.

“It makes absolutely no sense to take a homeless person’s car, confiscating it, impounding it. If you take away their car, they’re going to be on the street. That’s not a benefit to society. Common sense has to be in play.”

At the moment, though, the middle ground is hard to find.

Homeless advocates say cities could make exceptions for extremely low-income citizens — maybe let them hold on to the car but pay off the tickets in installments.

Some cities, including San Francisco, have payment plans — but nothing in place to return cars to the homeless or restrict impoundment of those cars in the first place.

A federal district court judge in San Francisco is expected to hear Kayode’s motion this month for a preliminary injunction to get his car back. A hearing on his lawsuit would be scheduled after a ruling on the injunction.

Of course, if the preliminary injunction is granted and San Francisco has to return Kayode’s car, he will still technically owe that $21,000 in parking, towing and storage fees until the case is decided.

Kayode, who has been homeless the past six years, looks back on the incident and its aftermath with a mixture of anger and despair.

“If I have my car, I have my phone. That’s all I need. I can earn money,” Kayode said. “But right now, they are holding my car hostage. What I want to know is, does taking my car from me help the city budget in one way or another? Is my car going to make them or break them?”

He stops a moment, looks around the crowded and chaotic lobby of the homeless shelter he now calls home.

The California Dream series is a statewide media collaboration of CALmatters, KPBS, KPCC, KQED and Capital Public Radio with support from the Corporation for Public Broadcasting and the James Irvine Foundation.

Correction (Sept. 28, 2018): A previous version of this story misidentified the year and color of Kayode’s car. The text has been corrected.