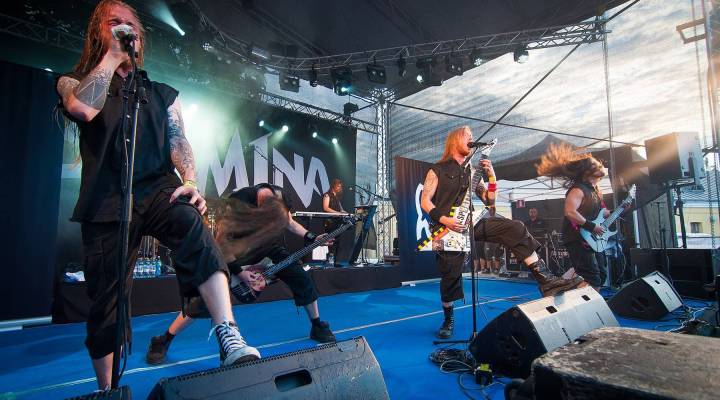 Some towns are known for their berry festivals. Others for their lobsters. In Finland, a small rural community is making waves for something else: a heavy metal legacy.

Finland’s long been known as the home of the once dominant cell phone company Nokia, steaming hot saunas and a robust welfare state. But increasingly, it’s gained a reputation as a metal exporter — heavy metal, that is. Finland has more than 50 metal bands for every 100,000 citizens, making it, perhaps, the heaviest of all metal places in the world. The metal scene even got a shout out from President Barack Obama at a 2016 White House state dinner.

So, when a national search in Finland to find the heaviest of all heavy metal places brought the town of Lemi — population 3,076 — into the international spotlight, it presented the small town with a unique economic opportunity.

With the popularity of bands like HIM, Nightwish and Children of Bodom in the late-1990s, Finland cemented its reputation as a metal stronghold. While metal is a genre relegated to the underground in many countries, metal has flourished in Finland and its Nordic neighbors. Metal bands top Finland’s music charts, professors at universities organize heavy metal research conferences and Finnish metal bands have even won the international song competition Euroversion.

“I think metal should be like extreme. Really, like kick people’s asses,” said Antti “Hyrde” Hyyrynen, singer and guitarist of Finnish metal band Stam1na, with a laugh. “But in our culture this starts to be like a boring thing.”

Stam1na’s past five albums have gone number one in Finland and they’ve won three EMMA Awards, the Finnish equivalent of the Grammy. Hyyrynen certainly looks the metalhead part with long blond hair, arms and hands covered in tattoos and a T-shirt of British death metal band Carcass. On a recent Wednesday, Hyyrynen and other musicians in Finland’s punk and metal scenes gathered to record an anthem for a local hockey team at Astia Studio in Lappeenranta, Finland. It’s the  same studio that’s produced some of Finland’s most popular and best-selling metal albums.

It’s hard to pinpoint exactly why technical, extreme music is so prolific in Finland. Hyyrynen shrugs off cliches about how Finland’s long, dark winters are the source, saying compulsory music education in Finland schools is probably more of an influence. He acknowledges Finn’s have a reputation for having a reserved demeanor, but says that’s not the whole story.

“When we’re not silent, we’re probably shouting and our language is like clack clack clack,” Hyyrynen said. “It sounds really aggressive.”

Just like metal. Today, the scene’s still going strong — contributing to a national music industry worth over $1 billion.

“But the thing is I never, ever expected that our small town Lemi would be in any way connected with this,” Hyyrynen said.

The Capital of Metal contest

That all started with a guy named Eeka Mäkynen. He’s the head of the company Finnish Metal Events which organizes Helsinki’s Tuska Festival, northern Europe’s largest metal event. It spans three days with 15,000 people attending each day. In Finland, money brought in by festivals like this account for nearly one-third of the music industry’s total sales.

With metal as both an export and a way to attract tourists Mäkynen and some friends had an idea.

“Let’s list all the bands that we have in Finland,” Mäkynen said. “Then we can say that it’s really the capital of metal and the most bands in the world.”

More than that — could they find the city in the country with the highest concentration of heavy metal bands? Could it be a contest where cities were ranked on how metal they are?

So, they sent an email to, of all places, the Finnish government.

“They sent us an email like, ‘Would you be interested in this?’ and we said ‘Of course’,” said Meira Pappi, a country branding specialist for the Ministry for Foreign Affairs in Finland. A contest to find the world’s heavy metal epicenter? A perfect opportunity to promote Finnish culture and boost tourism. An investment of $47,000 from the government and local cities allowed them to build a website, make merchandise and promote their national quest to find the city with most metal bands per capita. A city to crown the Capital of Metal.

Lemi, a municipality with just 3,000 residents, emerged as that place because it had 13 metal bands.

“Everyone was like what is Lemi, where is Lemi – no one really knew about it,” Pappi said. “So I sent an email to the mayor of Lemi like ‘Hi, I’m not sure if you’re aware of this campaign that’s been going on, but it looks like you may be winning.’ And as it turns out the mayor, he’s a metalhead.”

This June the rural community in east Finland was officially declared the Capital of Metal.

In Lemi, cows and horses lounge in fields, colorful houses dot the town and people sell vegetables in the town square. This place, the newly crowned Capital of Metal, is quiet and, honestly, kind of cute.

Lemi Mayor Jussi Stoor proudly wears a T-shirt that says “Capital of Metal Lemi” on it. The town erected a plaque saying the same thing in its town square.

Stoor proudly points out a new addition to the town. In the middle of the town square stands a shiny stainless steel plaque, the same size as him. It says “Capital of Metal — Lemi” in sharp, angular letters. It looks similar to the logo for heavy metal giants Metallica.

“Tourists, they have to have some place to take selfies,” Stoor explained.

Like many small towns, Lemi’s happy to attract any tourism dollars usually spent in big cities, so they’re taking their new title and hoping to capitalize on it.

The first test of that? They’re throwing a 10-band metal fest: Capital of Metal LIVE.