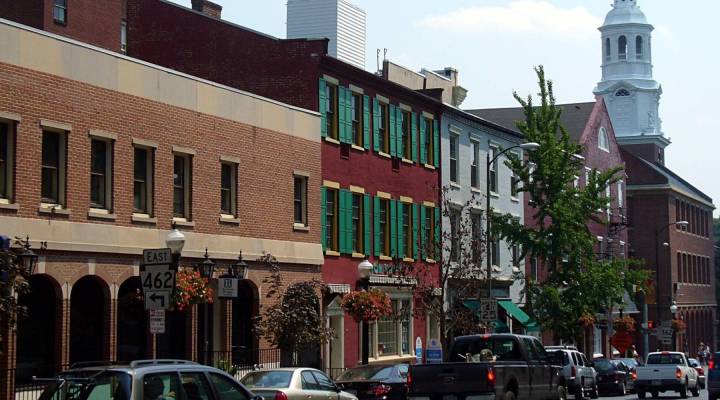 In the 1990s, I visited the town of Lancaster, Pennsylvania, and it needed work shall we say. It had a downtown where many feared to tread after sundown.

Now, Lancaster, with a population of 60,000, where 40 percent are white, 40 percent are Latino and 15 percent are African-American, is a vibrant, foodie haven that showed up on a top 10 list of coolest places to visit. What was the trick?

The New York Times columnist Thomas Friedman just wrote about this in a piece called, “Where American Politics Can Still Work: From the Bottom Up.”

He joined us to talk about how civic coalitions are helping to revitalize old towns. Below is an edited transcript of the interview.

David Brancaccio: Now the magic here is what you call the CAC — the complex adaptive coalition. Several of your sources in that regard used the phrase, “You check your politics at the door.” What is this coalition?

Thomas Friedman: Well, basically it started with Hourglass. The name of the group was taken from the idea that the hour is late for our town. “If we don’t get our act together here (in the late ’90s, the leading industry in the town, Armstrong, was withering) our community is really going to die and our kids will never want to stay here, let alone come back on a regular basis.” So a group of the city’s fathers and mothers got together at the end of their careers to sit back and say, “We have got to come together and create a foundation, Hourglass, that can provide some of the resources: the venue to bring different sides together both racially and politically and the resources to bring in outside expertise to figure out how we’re going to revive our town.”

David Brancaccio: It must have been some political leaders who were more foresighted than sometimes we see in these towns.

Friedman: In 2006, Mayor [J. Richard] Gray was elected and a Democrat whose philosophy was basically, “I’m pro-business, but I want everyone to earn a living wage and I want to take care of the environment. And I’ll work with any Republican ready to work with me.” It turned out that there were a lot of Republicans in the town who found his middle ground a place that they could live and flourish.

Brancaccio: Now we’re talking Lancaster, Pennsylvania, but down the road a bit is Reading, Pennsylvania. Some see that town, Reading, as a demographic model for America, but you don’t think it’s the same model for renewal?

Friedman:  None of the towns around them — York, Harrisburg or Reading — have really been able to flourish in the way Lancaster has because of the way Lancaster got its act together. And, David, that comes down to this really intangible thing called leadership. Leaders who are farsighted, ready to put down their political armor. And it showed another thing that another expert I interviewed in the piece  — Gidi Grinstein, an Israeli societal expert — likes to speak about, which is leadership without authority. The number of people stepping up today to lead, even without formal authority.