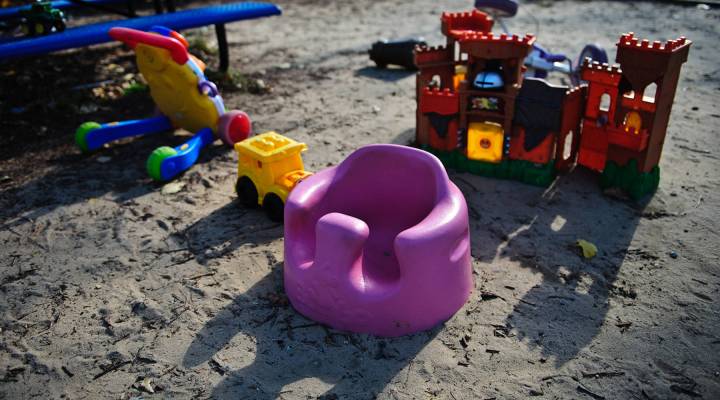 COPY
[Image Description: Numerous toys are spread across a child’s playground. The ground is sandy. A pink children’s seat is in the middle of the image, with a yellow toy truck and multi-colored doll house behind it. In the background is a blue set of benches.] NICHOLAS KAMM/AFP/Getty Images
Economics of Disability

[Image Description: Numerous toys are spread across a child’s playground. The ground is sandy. A pink children’s seat is in the middle of the image, with a yellow toy truck and multi-colored doll house behind it. In the background is a blue set of benches.] NICHOLAS KAMM/AFP/Getty Images
Listen Now

In a bright orange shirt, 8-year-old Aidan is ready to show off what he’s learning in school. His voice rises with excitement.

“Bonjour!” the third-grader exclaims, avoiding eye contact, in his family’s apartment in Brooklyn.

“I said, ‘French? He’s studying French?,'” Philip said. “I think for a while there she couldn’t comprehend the horror that I was expressing, because I figured if I’m having this much difficulty with the English-based subjects, surely this is just another layer of complication.”

In preschool, Aidan was diagnosed with pervasive developmental disorder not otherwise specified, a subtype of autism, according to Philip. For parents, finding out about a diagnosis and figuring out school services can be anything but straightforward.

Across the United States, schools are often the place where families first find themselves navigating services for a child with a disability. Under the federal Individuals with Disabilities Education Act, a student is guaranteed a right to a free and appropriate public education. When that law was originally passed in 1975, Congress promised to pay 40 percent of the extra cost of special education. Since then, Congress has never come close to fulfilling that promise, often leaving schools and districts to figure out how and what services they can pay for.

“Life is going on, and suddenly you’re dealing with this and having to learn at the same time,” Philip said. “One other thing that really comes out clearly, is it seems as though this thing is going to take a lot of money.”

For Philip, costs added up quickly. There was the occupational therapist so Aidan could learn how to hold a pencil. The twice-weekly reading program at $150 a session and an evaluation from a neuropsychologist, which insurance didn’t cover.

In New York City, the nation’s largest public school district, within 60 school days of requesting an evaluation, parents, teachers and other school staff are supposed to hash out and implement a student’s individualized education program or IEP. The New York City Department of Education’s annual report on special education showed major delays with that for over 4,500 students last year.

But when that IEP is written, under federal law, it’s the document that lays out exactly what services a student with disabilities gets.

Philip, who’s an educator herself, made sure Aidan got occupational, physical and speech therapies at school. It wasn’t always easy.

“Actually, what I really had to fight for was one-to-one tutoring and extra support because the curriculum moves really quickly,” Philip said.

Lori Podvesker, an advocate at INCLUDEnyc, a nonprofit that helps students with disabilities access services, said resources aren’t unlimited. Schools make recommendations based on what they have the capacity to give, not necessarily what students need.

“As we know, not all schools have the same resources,” Podvesker said.

In the past, New York City students with disabilities were often taught separately in their own classes. But in 2010, the district changed its student funding formula.

Now the district gives schools more money if they keep kids with disabilities in mainstream classrooms, the idea being that if you educate students with disabilities alongside peers, they’ll do better academically and socially. And that financial incentive has worked. Most special education students in New York City now spend at least 80 percent of their day in mainstream classrooms.

Podvesker, who’s a proponent for these kinds of classrooms, said they’re not a silver bullet. Just because a student is in a mainstream classroom doesn’t mean it’s enough to make up for other services they may need.

“There is still a huge achievement gap between students with disabilities in New York City and general education students,” Podvesker said.

There’s also a gap between what kids are legally obligated to get and what schools give them.

But still, one in four kids don’t get the full services they’re legally entitled to in their IEPs, according to the district’s special education report. Two families recently sued the district over that.

“Our focus is on ensuring that students with disabilities have access to a high-quality public education in the least restrictive environment,” said Toya Holness, New York City Department of Education press secretary, in a statement. “We make every effort to resolve concerns as quickly as possible.”

Across the country, school districts often find themselves the targets of lawsuits that allege they’ve violated a special education student’s right to an education.

“You have this inherent tension between what the parents want and believe is necessary for their child to succeed and what the school district is willing to do, whether financially or just conceptually,” said Jack Robinson, a Colorado attorney who represents families in special education matters.

The high court ruled unanimously that just access to education is not enough. In the opinion, Chief Justice John Roberts wrote schools need to offer services so students “make progress appropriate in light of the child’s circumstances.”

That one word — progress — means the difference between accessing education and actually getting an education.

“It’s transformational, I mean it really is,” Robinson said. “For the first time children with disabilities are entitled to more than just the bare minimum.”

Since the Supreme Court ruling, the federal education department released guidance to schools clarifying their increased duties under law. Yet, with the federal IDEA still only at about a third of full funding, it’s not yet known how this will play out for students with disabilities.

At home, he practices math problems with his mom, Alana Philip. He earns a high-five after completing them.

“There are moments when I’m thrilled with his progress,” Philip said. “This year has been a pretty decent year, but it came because we worked our butts off.”

And that hard work, she knows, is here to stay.